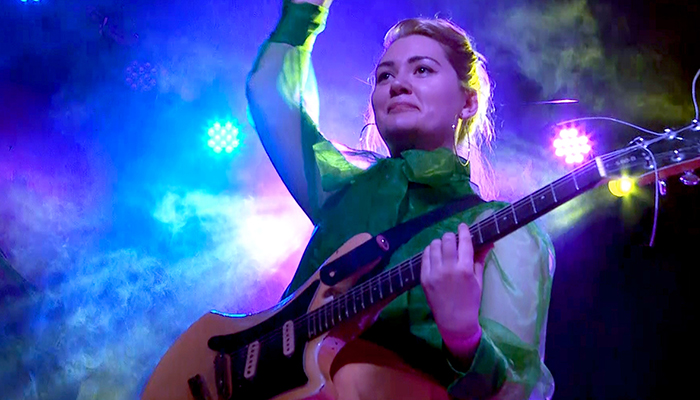 EuroNoize is a live music event modelled on the Eurovision song contest, featuring a bizarre cast of alternative and underground subpop bands. This year the UK hosted the event at the SCALA music venue near King’s Cross in London.

WaveFX, a webcast and film production company based in Cambridge, provided all the crew and equipment to film and live stream the event, including providing the WiFi needed to webcast from the roof of the building.

Ireland and Norway tied the event with the crew's favourite, Winny Puhh from Estonia, coming 5th – watch the madness here.

The EU-funded event is described as a celebration of “music that runs deeper than national borders” and was set up by promoters Galia and Pil Kollectiv to “represent the secret international fellowship of ‘punx and weirdos’ stretching everywhere from Russia to Ireland”.

Six production crew from WaveFX operated five cameras and three vision mixers, creating content for both the room and the livestream. The star of the day was the new Teradek Live Pro backpack, which was bought in to provide a stable internet connection; the backpack, placed on the roof of the venue, bonded five different cellular SIMs, giving the crew a stable upload speed of over 40mb.

Thousands tuned in from across Europe for the four hour show, and the watch again is available on the EuroNoize website.

Mark Mountford from WaveFX commented: “This was a bonkers event, a technical challenge but a lot of fun, the world needs more EuroNoize!!”

The stream was also bounced onto Facebook via multicasting, which is the ability to stream to one location and then repeat on another. This gives event producers the option to stream to Facebook, YouTube, Twitter and LinkedIn without the need for additional encoders.

For more information on how WaveFX can help film and stream your next event, festival or conference, please do call Jamie 01223 505600 or email office@wavefx.co.uk