Addenbrooke’s doctor in shortlist to head up UNAIDS 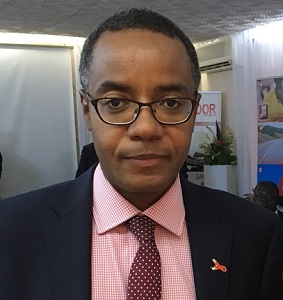 An Addenbrooke’s consultant is preparing to be interviewed for a very special job next week – to help rid the world of AIDS.

Dr Sani Aliyu has made the final shortlist of five candidates out of more than 260 applicants to be Executive Director of UNAIDS – the United Nations organisation committed to ending the world AIDS epidemic by 2030.

If his track record is taken into consideration, which includes helping more than 1 million people access life-saving HIV treatment in Nigeria, there is no reason to believe he can’t achieve this goal.

Dr Aliyu was the first joint trainee in microbiology and infectious diseases in Cambridge, and in 2008 became the region’s first joint consultant in both specialties. This unique arrangement enabled the two clinical departments to jointly work together and is now mirrored across training posts in infection in the UK.  Dr Aliyu, who was born in Nigeria, explained: “Because of my work at Cambridge and my Nigerian background, I was approached by the Nigerian Government in 2016 to help sort out their AIDS programme which was in difficulty.”

A year later he received a call from the office of the Nigerian president asking him to head up its National Agency for the Control of AIDS.

Taking special leave from Addenbrooke’s in January 2017, Dr Aliyu approached the role with three key priorities – to understand the scale of the problem, to tackle the issue of pregnant mothers passing on HIV to unborn children, and to make the programme financially sustainable. With just two and a half years to achieve this, he could not afford to deviate from his target.

His first task was to carry out a population-based survey across the country, leading a team of more than 6000 volunteers. It was not an easy assignment, as Nigeria is a large and complex country with a population of almost 200 million. The teams faced numerous hazards – one group of volunteers was almost kidnapped and another nearly drowned - but at the end of the programme, Dr Aliyu had more than 230,000 responses, making it the world’s largest ever HIV-specific survey.

Dr Aliyu said: “The results proved the burden of HIV was half of what was initially thought. This created a critical point in the programme as suddenly the task of getting everybody in Nigeria on treatment became achievable.”

Based on the results, a new momentum was created with donor agencies and government coming together and committing for the first time to massively upscale the number of people on treatment by an additional half a million people by the end of 2020. This means the country will be able to achieve epidemic control by early 2022 if this “surge” in placing people on treatment is maintained. In the absence of treatment, the majority of the 1.9 million people infected with HIV in the country would be dead within a decade.

Secondly Dr Aliyu pushed for the integration of HIV prevention into the maternal and child health programmes for pregnant women, in a country where up to 50 per cent do not access antenatal care. As a result the percentage of pregnant women aware of their HIV status has risen from 30% to 45%, with 8 out of every 10 known HIV-positive pregnant women receiving antiviral treatment during their pregnancy, thus preventing their babies from acquiring HIV.

If successfully appointed to the UNAIDS post, Dr Aliyu will aim to implement similar HIV prevention and treatment programmes on a global scale.

He added: “Tackling the issue of AIDS is not just about treating the illness, it is about addressing the social and political issues on a much wider scale, and over the past two and a half years I have been fortunate to really gain experience of this.

Other candidates for the post are:  Salim Abdool Karim from South Africa, Chis Beyrer from the US, Winnie Byanyima from Uganda and Bernard Haufiku from Namibia.

Final interviews take place on 24 July, where a shortlist of three will be chosen and forwarded to the UN Secretary General António Guterres, who will then select the successful candidate.

Dr Aliyu added: “We are really beginning to see real progress when it comes to ending the AIDS epidemic. To be given the opportunity to head up UNAIDs - and have a real chance of ending the epidemic - would be an absolute honour and one that I strongly believe is achievable.”