Prior Scientific exhibits at the Cambridge Museum of Technology 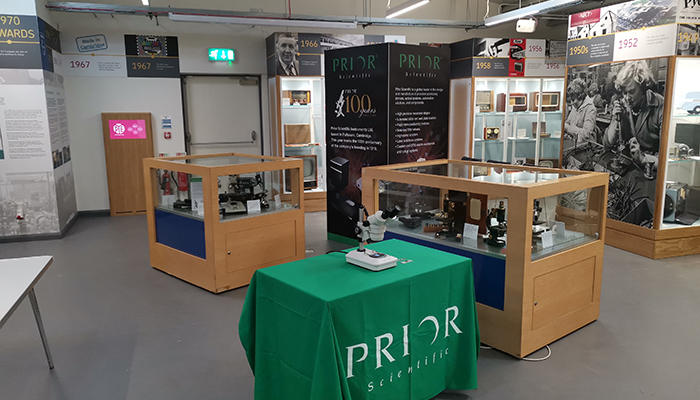 Prior Scientific is exhibiting at the Cambridge Museum of Technology, which has just reopened after a major refurbishment supported by the National Lottery Heritage Fund. The temporary exhibition will allow members of the public to see Prior's history over the past 100 years.

Prior Scientific Instruments Ltd is honoured to be the first company to exhibit in the reopening of the Cambridge Museum of Technology in Cambridge at The Old Pumping Station, Cheddars Lane, Cambridge CB5 8LD.  Prior Scientific, celebrating its 100 year anniversary in 2019 and the last remaining UK microscope manufacturer, has an extraordinary new exhibition representing the company’s history of achievements.

The museum's industrial heritage has been further preserved and given a new and fresh look with a modern café and improved facilities, supported by the National Lottery Heritage Fund and other funders. The site is the former Old Pumping Station and was constructed in 1894 as a solution to dealing with waste problems in the city.  It was very intuitively designed so the waste could be recycled to power steam engines.

“It is quite a major development. The whole site has been pulled around but one element is a whole new building which will allow us to exhibit items that have never been on display before”, said Morgan Bell, assistant museum curator.

The exhibition includes the very James Swift & Sons (a Prior Scientific brand) Discovery microscope that Robert Falcon Scott was believed to have been used on his Antarctic expedition in 1901-1904.  This expedition was the first official British exploration of the previously untouched continent. The Discovery model was ideal for the scientific research of Scott and his crew was because it was designed to be portable, yet fully functional, and durable. Other items are on display include Prior’s first ever microscope available to the public in 1930 and the 1952 research microscope which offered researchers a high level of precision and a manual stage to move a sample. More recently, Prior has developed many automated component parts which allow faster and more in-depth analysis.  The public now have the opportunity to see this evolution for two months only (16th July –  8th September 2019).

“Both Prior Scientific and the Cambridge Museum have deep heritage in the Cambridgeshire area, and that is why we were so pleased to be given the opportunity to reveal the 100 year history of Prior Scientific to the general public, this will give an insight into what we have developed over the years” said David Marshall, UK/EU & ROW Marketing Manager.

Prior Scientific is a global leader in the design and manufacture of precision positioning devices, optical systems, automation solutions, and components