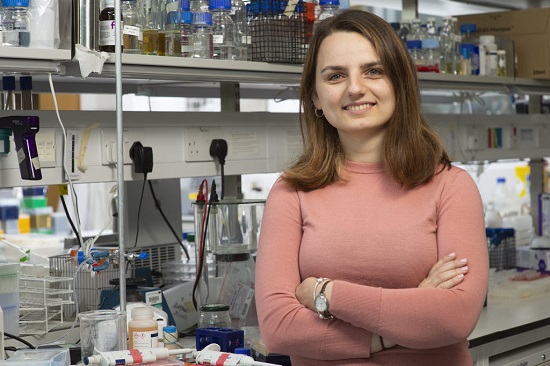 The UKRI Policy Internships Scheme gives doctoral students the opportunity to work for three months in one of a selected group of highly influential policy organisations. With applications now open for 2020, PhD student Jonida Tafilaku from the MRC Laboratory of Molecular Biology talks about her time spent at the Parliamentary Office of Science and Technology (POST).

Can you tell us a bit about your internship?

From January to March this year I worked at the POST office, but not the mail handling kind. This POST – the Parliamentary Office of Science and Technology – serves the House of Lords and the House of Commons by producing reports, called POST notes, on different science policy topics to brief politicians. The topics vary and can be anything from medical subjects like cancer treatment to environmental science concerns.

Interns are tasked with writing a POST note during their time in the office. Mine was about vector-borne human diseases in the UK and how climate change will affect this issue. We already see disease-spreading insects, like mosquitoes, in Britain. They just haven’t established breeding colonies yet, which is why they aren’t an urgent issue here compared to other countries, such as those in the tropics, where mosquitoes can spread deadly diseases. The question I set out to answer was: what are the chances that we will see active breeding colonies by 2050, and how could it affect our health?

I didn’t know much about the topic at first because it’s quite different from my molecular biology-based research. So, I began by reading and then interviewed around 30 people – including academics, such as climate scientists and infectious disease experts, and representatives for government agencies and public bodies. After gathering a wide range of views on the topic, I had everything I needed to write a well-researched POST note, presented in a politically and scientifically neutral way.

What motivated you to apply?

I’ve always been quite interested in policy and the intersection between science and policy-making. Because I’d only experienced academia, I wanted to see how it goes from basic research, which is what I’m doing now, to the point at which someone asks, “how are we going to address this key issue?”

Was there anything you learned that surprised you?

Something that really surprised me was how much work goes into POST notes. They’re only four pages long, so when I first joined and was told that they take three months to write, I thought: “I can do that in a week!”. But there’s so much work that goes into them and they’re incredibly well researched.

I also discovered just how much confidence my PhD has given me. During the internship, I interviewed remarkable, world-leading experts. Because as PhD students we’re in an environment where you’re expected to give talks and be confident about the research you conduct, asking experts difficult questions wasn’t as intimidating as I thought it would be.

Was there anything you took away with you that will help with your research?

It was a fantastic opportunity to work on my communication skills as I was talking to people or writing every day. I was exposed to a new world of science writing, breaking down complicated technical terms to convey the research accurately without the reader needing to be an expert to understand it.

Being conscious of how I spoke to people who didn’t have a scientific background was also quite new to me. When speaking to politicians, you don’t want to get bogged down by too much detail; you want to show the bigger picture. That was something I learnt on the job, how to be a bit more selective.

Has this experience changed your thoughts on science and policy-making?

It opened my eyes to how scientists can make a difference by engaging with government and Parliament. Whether that’s giving evidence, sitting on a committee or being interviewed for POST notes, you can translate your research to have an impact. There’s a huge desire and need to have more evidence-based policy-making.

Finally, what advice would you give to other PhD students thinking of applying or wondering if this internship is right for them?

I would urge them to apply, even if they’re doubtful about it. I wasn’t sure at first because I’m at a critical point in my PhD, but I’m glad I took part. It offered me the pause I needed, to think about my research from a different perspective. I came back feeling fresh and enthused about picking up a pipette again and cracking on with my project.

The UKRI Policy Internships Scheme is open to doctoral students funded by the research councils of UK Research and Innovation. Internships will take place during 2020 and students must be able to start their internship before the end of their funded period of study.

To apply, complete the online application form by the deadline of 12 August 2019.