Marshall Leasing mourns the loss of an amazing founder 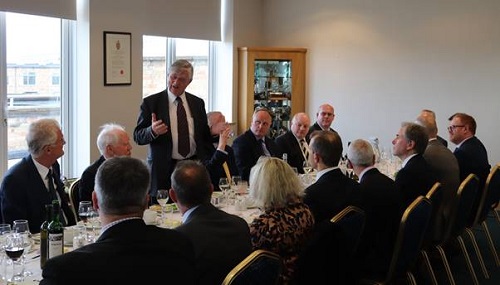 The very sad news of the death of Sir Michael Marshall CBE DL was announced at the weekend.

Sir Michael, who passed away on Saturday evening while on holiday in Spain with his wife, Sibyl, and friends, comes after Sir Michael was honoured by Marshall Leasing at a lunch in his honour held at Cambridge Airport on 17th May.

Marshall Leasing, which celebrated over ‘50,000 vehicles leased’, hosted Sir Michael and other VIP dignitaries including Dr John C Taylor OBE  to celebrate his life’s business achievements and love of flying which he continued for over 70 years. So much of Marshall Leasing’s success is built on the core Marshall Values.

Sir Michael, who founded Marshall Leasing and who grew his family company into one of the largest privately-owned businesses in the UK, encouraged, supported and guided the ML management team throughout. The success that Marshall Leasing has enjoyed over the past 28 years can be attributed in so many ways to the trust and encouragement of its founder.

Jonathan Ross, Director Marshall Leasing, said: ‘There can be no way of expressing our sense of pride in having been students of the great man. Sir Michael was a true leader and entrepreneur. He led by example, always dedicated to the day job. He was forever challenging us to provide the customer with our best possible service and he put reputation ahead of all things. Despite being one of Cambridge’s biggest employers across Marshall Motor Group, Marshall Aerospace and Land systems, he somehow always managed to know every member of staff on a first-name basis. Above everything else, I will always regard him as the kindest of employers, and a true gentleman. I, along with my colleagues, many of whom have worked for Marshall over decades, will work hard to maintain and deliver on his legacy.’