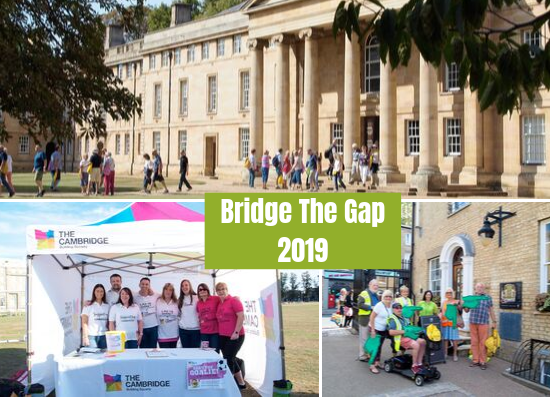 Nearly 1600 pre-registered and a further 500 people signed up on the day, encouraged by the spectacular September sunshine, which also provided a perfect afternoon to enjoy the musical entertainment at the finish line.  Over 18 consecutive years, an amazing grand total of 36,100 people have now taken part in the event!

The Bridge the Gap Committee are delighted to announce that this year’s event has already raised over £35,000.  Funds will be evenly split between two local charities: Arthur Rank Hospice Charity and Romsey Mill. Impressively, more than £535,000 has now been raised by the walk since it started.

Mayor of Cambridge, Cllr Gerri Bird, cut the ribbon to start the walk. She commented: "This is an important event and it gets the community together.  There were a lot of kids taking part too: it’s good to get young people more involved with what goes on in the City.”

Each year Bridge the Gap Walk meanders around a newly created route, designed to include favourite Cambridge locations and exclusive areas of College grounds not usually accessible by the public. Anne Scott from Sawston who took part with her sister, said: “We’ve done it for 17 years, but there are things we haven’t noticed before, it’s still fresh.  I tell you what is fantastic, and you don’t go in there very often, is the Library and we went over the Mathematical Bridge and I think that’s the first time we’ve ever been over that. You live near Cambridge and you take these things for granted. You see so much! We love it.”

As well as being given the rare opportunity to walk over the iconic Mathematical Bridge and walking amongst the 17th and 18th century book cases of Cambridge University Library, other notable highlights included: being welcomed into the beautiful grounds of Queens’ College (oldest building on the Backs); The Old Library of Corpus Christi College, named after its main benefactor Master Matthew Parker who’s inquisitive nature into church matters is said to have led to the phrase ‘nosey parker’; and the Barbara Hepworth statue outside The Heong Gallery.

Whilst soaking up the colourful gardens, historical architecture and ambience of the day, walkers were treated to facts and anecdotes by the Society of Cambridge Tourist Guides along the route. Music drifted through the air thanks to Sing! Choirs on Queen’s Green and Jazzwave in the Old Court of Pembroke College. The City of Cambridge Brass Band and The Blue Clovers set the scene for the Cambridge Lindy Hoppers dancing, who encouraged the public and Marvin the Moose (of Cambridge United) to join them on Parker’s Piece.

The Cambridge Building Society were headline sponsor for the eleventh consecutive year. Their vital sponsorship and support – alongside that of Cambridge Assessment, TTP Group, Co-op and media support of Cambridge Independent and Cambridge 105 Radio – means that every penny raised by walkers through registration fees, participant sponsorship and donations, directly benefits the people that Romsey Mill and Arthur Rank Hospice Charity care for and support.

Carole Charter, Head of Marketing for The Cambridge Building Society, said: "Bridge the Gap is a firm fixture on our calendar here at The Cambridge. Now in our 11th year as headline sponsors, we’re delighted to have played an active part in raising an incredible amount of money for two important local charities. Bridge the Gap goes from strength to strength every year and is a well-loved event for Cambridge residents, visitors and the team here at The Cambridge where we had over 160 team members and their friends and families take part – a record breaking number!”

Sharon Allen OBE, CEO of Arthur Rank Hospice, comments:  “We would like to thank  each of the individual Colleges and the Cambridge University Library, who featured on this year’s route, as well as our generous sponsors, and the very many local companies, groups and businesses who supported us through providing refreshments, water, volunteers for the day or golden ticket prizes.”

Neil Perry, Chief Executive of Romsey Mill adds:“This is a unique event and an example of a really successful collaboration which relies on the passionate support we receive from the local and business community. Not to forget of course, the wonderful walkers who take part each year. Thank you - we are so grateful!”

The Bridge the Gap Committee additionally extend their heartfelt thanks, to: members of the Society of Cambridge Tourist Guides who generously volunteered their time and expertise; Sing! Choirs, Jazzwave, The City of Cambridge Brass Band, The Blue Clovers and The Cambridge Lindy Hoppers for their amazing entertainment; stall holders on the day who each made a donations from their takings, including Cuppa JoJo’s, Caffe Mobile, The Tin Kitchen and Nanna Mexico; PPP First Aid; Aristocaters of Sawston who supplied lunches for volunteers; and each and every one of the 135 volunteers, present on Parker’s Piece or acting as route marshals, who helped make the event so safe and enjoyable, including those from the Rotary Club of Cambridge, the Coop, Diamond Ladies (Saffron Walden), Air Cadet Force and staff and volunteers from organisations forming the Bridge the Gap Committee.

The Charities are encouraging those who have been kind enough to raise sponsorship to collect and hand it in by the end of September. Sponsorship forms and monies can be accepted in person at Arthur Rank Hospice’s Shelford Bottom home between Monday and Friday 9-5pm, or sent by post to Arthur Rank Hospice Charity, Cherry Hinton Road, Shelford Bottom, Cambridge CB22 3FB.  Online options for sending donations are also available: please call 01223 675888 for details.

The Celebration evening to reveal the grand total to be shared between the two charities will take place on Tuesday 19 November at The Cambridge Building Society, St Andrews Street Store, for more information please contact Arthur Rank Hospice Charity on 01223 675888 or fundraising@arhc.org.uk