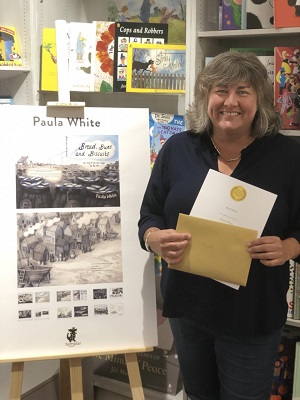 Paula White from Lowestoft, Suffolk, has won this year’s Templar Illustration Prize, which comes with a £750 first prize and the chance of being published by Templar Publishing, a children’s book imprint of Bonnier Books UK.

Paula led the way as graduates from the Children’s Book Illustration MA course at Anglia Ruskin University (ARU) achieved a clean sweep of the top three prizes at the ceremony at Nomad Books in London. 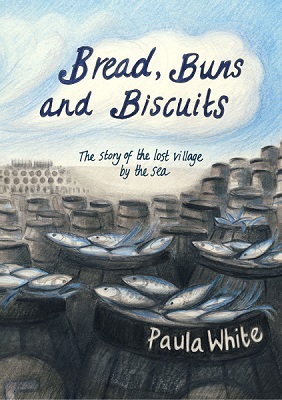 The theme of this year’s competition was “Where I Come From” and Paula’s winning children’s book submission Bread, Buns and Biscuits was inspired by her family history, rooted firmly on the Suffolk coast.

Both sides of Paula’s family were seafarers but her story is based on her grandfather Percy, who decided a life at sea wasn’t for him and instead became a baker. Paula describes her winning submission Bread, Buns and Biscuits as a “tale of everyday life in the fishing village that was once situated in my home town on the Suffolk coast. It recreates a vanished way of life, describing the daily lives of a hard-working, close-knit fishing community.

“Sadly, the busy and bustling Beach Village would come to an end. After major flooding and two World Wars, the people of the village saw their way of life change. Many of the fishermen had lost their boats in the war and many of their houses were damaged and the Great Floods in 1953 were the final blow for the Beach Village. Salt water seeped into the small cottages and houses, which eventually had to be pulled down before they crumbled.

“Discovering our past and how our relatives lived, worked, faced and overcome challenges can help us to have a clearer understanding of who we are and where we come from. It can help bring communities together, no matter how different our background.

“I know that through my research and discovery of my own heritage, I feel proud of my home town and appreciate how hard my relatives worked to make a living in very different times. It makes me feel grounded.”

One of the award judges, Lucia Gaggiotti, said: “Paula White writes poems through images. Her [work] evokes smells, tastes, and sounds that have almost disappeared. Her pencil fades away like the traditions of the village from which she comes, but slight touches of colour give life and hope to a possible present – to stories that never die.”

Martin Salisbury, Professor of Illustration at ARU's Cambridge School of Art, said: “It is extremely gratifying to see our wonderful graduates continuing to dominate the major awards in children's publishing. This is the second year of the Templar Illustration Prize and more and more publishers are searching for new talent in this area.

“Paula's winning Bread, Buns and Biscuits perfectly fits the competition theme of 'Where I Come From', a superb example of the contemporary genre of narrative non-fiction – telling the story of the ancient fishing village on the shore of her home town of Lowestoft, that was washed away in the terrible floods of 1953.”