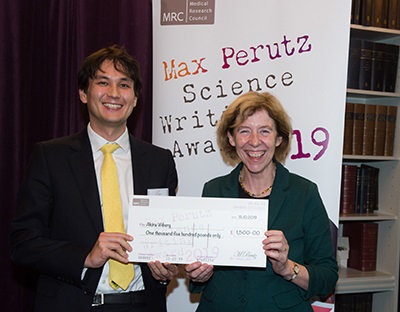 MRC-funded PhD student Akira Wiberg, of the University of Oxford, scooped the main prize of this year's Max Perutz Science Writing Award. At the awards ceremony this week, Akira received the first prize of £1,500 for his article: "Getting on your nerves."

Award-winner Akira Wiberg said: "I'm utterly delighted. It was unexpected so a very pleasant surprise and I'm very pleased that the disease I'm studying - carpal tunnel syndrome - has got a bit of publicity today, because it's very debilitating and important for society. I'm hoping to tread a career as a surgeon scientist. I'm currently a plastic surgery trainee but I want to carry on doing my clinical work alongside research and I think communicating my research with the public is very important. This is my first step in doing that."

The awards were announced by the MRC's Executive Chair Professor Fiona Watt, who chaired the judging panel, and fellow judge Andy Ridgeway, journalist and Senior Lecturer in Science Communication at the University of the West of England in Bristol.

Fiona said: “This is the second year that I have chaired the judging panel of our Max Perutz Award. It is a really enjoyable experience. From this year’s set of 116 entries, we shortlisted 12 outstanding writers. Their articles represent the fantastic breadth of research we fund – from discovery research to clinical studies and development of new technologies. Topics include disease prevention, precision medicine and new ways to treat mental health conditions and tackle antimicrobial resistance.

"Using conversational language, relatable anecdotes and personal experiences, the writers grab the reader’s attention, explaining simply and clearly why their research matters. I’m proud to say that previous winners have gone on to win national science writing awards, give TED talks and become BBC presenters. Encouraging our researchers to make their science accessible to non-scientists is more important than ever to help us secure public and government support for life-changing research. For many entrants this was their first step along that journey – I wish them every success in future."

The keynote speech of the evening was delivered by Professor Robin Perutz, son of the late Max Perutz.

Speaking highly of the competition, Robin said: "For Max, there was nothing more important than communicating the benefits of science and dispelling the misinformation that surrounds it. He would be thrilled that you as the MRC research students, are out there passing on the message and that the competition still bears his name."

Dr Roger Highfield, MRC Council member and Science Director of the Science Museum Group, was the third member of the judging panel. Commenting on the importance of good science communication he said: “We need to build public acceptance and enthusiasm for what scientists do if research is to thrive. I really enjoyed judging the Max Perutz Award, which provides a panoramic glimpse of the epic range of MRC-funded research and encourages embryonic writing talent.

“This research was funded by the public, so we have to explain how the money has been spent and why. It is critical that young scientists learn how to write in a way that can grab the interest of non-specialist so they have the opportunity to explain why their work really matters in a way that any taxpayer can understand.”

Before the ceremony the shortlisted entrants had the chance to attend a science writing masterclass led by Dr Claire Ainsworth, freelance journalist and science writer. During the afternoon session, the shortlisters learnt about the principles of effective popular-style science writing and tried their hand at editing each other’s articles.

The award is named in honour of one of the UK’s most outstanding scientists and communicators, Dr Max Perutz. Max, who died in 2002, was awarded the 1962 Nobel Prize in Chemistry and was the founder and first chairman of the MRC Laboratory of Molecular Biology (LMB) in Cambridge. Max was also a keen and talented communicator who inspired countless students to use everyday language to share their research with the people whose lives are improved by their work.