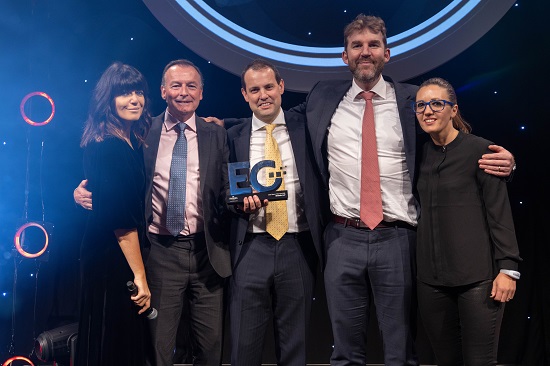 Top 100 law firm Birketts has scooped the national Legal Team of the Year title at this year’s Estates Gazette Awards.

Described by the Judges as ‘an East of England-based law firm behaving like a London-based international business,’ this marks another significant Award win for the leading East of England law firm, Birketts. It is a particularly impressive achievement when considered in the context of others on the shortlist, which was entirely made up of global firms.

Jonathan Agar, Chief Executive Officer at Birketts, commented: “To win the prestigious Legal Team of the Year award in a highly competitive year, is a tribute to the strength of our services to the property sector, both in terms of the growth of the team (58 new recruits joined the property division in the last financial year alone) and the income generated (which amounts to 17% year on year growth). This Award is a testament to the combined efforts of those in, and those supporting, our property teams.”

Chris Schwer, Head of Birketts’ Property Division stated: “The Estates Gazette Awards are recognised as one of the most significant awards events in the sector. For Birketts’ highly regarded property team to be crowned winners of the Legal Team of the Year is a credit not only to the individuals, but to the wider firm for its contemporary approach and forward looking attitudes. The firm is increasingly being recognised as a leader in the real estate industry.”