An instrumental collection goes on display 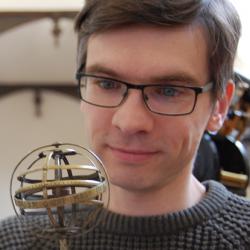 Seventy-five years ago, R S Whipple donated an astonishing haul of antique scientific objects and books to the University of Cambridge. To mark the anniversary, hundreds of its treasures are going on display at the museum named in his honour.

In November 1944, the East Room of the Old Schools, the University’s ancient administrative headquarters, began to fill with wonderful curiosities. Medieval astrolabes, a ship-shaped sundial, and seventeenth-century telescopes glinted and intrigued.

Until the early 1930s, the room had served as part of the University’s library; now it found itself exhibiting an extraordinary donation, the prized possessions of a successful local businessman. His collection comprised well over a thousand scientific instruments made between the fifteenth and the twentieth centuries, together with a similar number of scientific books, some extremely rare.

The collection began in 1913, when Robert Whipple purchased an early eighteenth-century refracting telescope for 10 francs in an antiques shop in France. This elegant object, known to curators as “Whipple 1” will greet visitors as they enter the Whipple Museum’s 75th anniversary exhibition.

Presenting his collection to assembled dignitaries in 1944, Whipple was typically modest. He was pleased to have avoided “financial disaster” and admitted he’d had “much fun” along the way. “For many years,” he added “I have hoped that the collection, with the books accompanying it would find its way to Cambridge ... I hope that it will form the nucleus of a Museum for the History of Science in Cambridge.”

The University gratefully accepted the donation on the understanding that it would form the basis of such a museum. For several years, however, the collection lacked a permanent home, being housed first at the Fitzwilliam Museum, then Girton College and finally two rooms in Corn Exchange Street. At last, in 1959, the collection moved into its current home, the Whipple Museum of the History of Science on Free School Lane.

Normally only about 10% of objects from Whipple’s founding collection can be seen in the museum. But from now until summer 2020, visitors will have the chance to see a large proportion of the collection in a dazzling display of scientific progress, craftsmanship and connoisseurship.