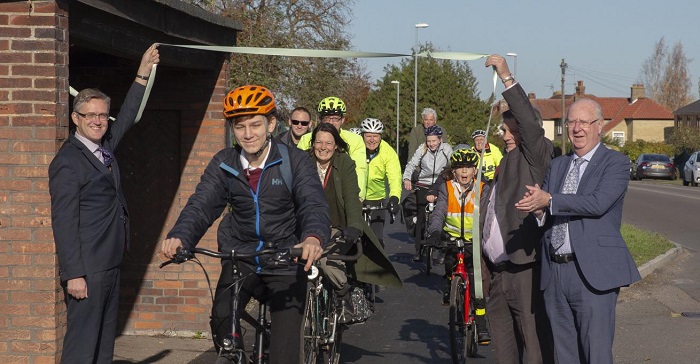 An improved cycling, walking and equestrian route has opened in Sawston to deliver smoother and safer journeys.

Cllr Ian Bates, vice-chair of the Greater Cambridge Partnership’s Executive Board, cut the ribbon to open the Stapleford to Sawston cycling, walking and equestrian route this week.

The Cambridge Road route – heavily used by residents and students from Sawston Village College – has been resurfaced and given new edges to increase the width of the cyclepath.

A stretch outside the college in New Road has also been revamped as part of a package of ‘quick wins’ being delivered by the Greater Cambridge Partnership to make immediate improvements to the area’s cycling network.

Cllr Bates said: “This work, funded and delivered by the Greater Cambridge Partnership, will make it safer and easier for people to travel between Stapleford and Sawston – particularly for the pupils and parents of children at Sawston Village College who use this path every day.

“I hope, with these improved facilities, everyone will enjoy safer, smoother walking and cycling rides, and it will encourage more people to get out and about on their bikes, and by foot.”

The GCP is working on proposals for the Sawston Greenway - a new walking, cycling and equestrian route. It is one of 12 Greater Cambridge Greenways being developed by the GCP to link surrounding villages to the city.