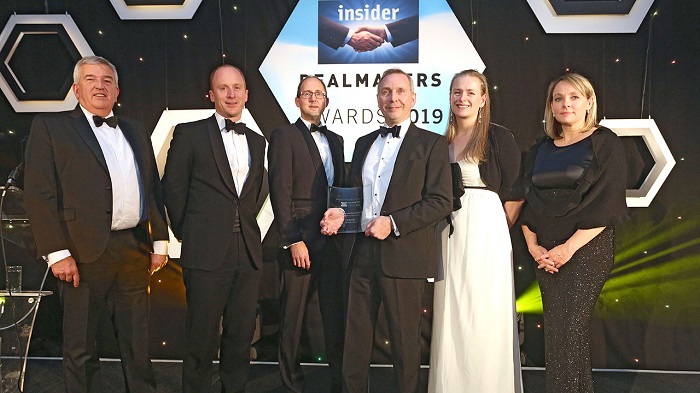 Birketts has been named ‘Corporate Law Firm of the Year’ for the second successive year at the Insider Media Central & East of England Dealmakers Awards.

Held at Hilton DoubleTree in Milton Keynes and compered by Kyran Bracken, the award evening brought together the region's corporate finance firms, banks, funders, private equity houses and individuals who have excelled in dealmaking.

The Corporate Law Firm of the Year award is presented to the standout corporate law firm based in the Central and East of England region. Birketts’ Corporate Team was declared the winner having worked on several high-profile deals including the sale of MLM Group to Sweco, the acquisition of Stuncroft by International Riding Company and the sale of a minority interest of Just Digital to BGF.

Birketts was also named as one of the advisers who worked on Deal of the Year (below £10m) for the sale of T. Groocock & Co. to The Little Norwich Shoe Company. The deal safeguarded about 60 jobs in Kettering and saved a business with a rich heritage in the region going back more than 100 years.

Adrian Seagers, Head of Birketts' Corporate Services Division commented: “We are thrilled to win this award for the second successive year which acknowledges the team’s focus upon technical excellence and our drive towards impeccable client service. It was also very pleasing to see James Allen and his team’s work acknowledged in the Deal of the Year (below £10m) category.”

Adrian continued: “Thanks to the commitment of the Corporate Team in all four of our offices we have grown a client base with an increasingly international outlook. Over the years, the team at Birketts has earned a first-rate reputation for building strong, multi-skilled teams as we deliver industry expertise in a number of sectors such as technology, family-owned businesses and motor retail.”

Jonathan Agar, Chief Executive Officer at Birketts, commented: “This is another fabulous feather in our cap and great testament to the collective hard work of the Corporate Team. We are currently enjoying a great deal of award success having also been crowned winners at The Lawyer and Estates Gazette.”