More than £47,000 Bridges the Gap for two well-loved local charities 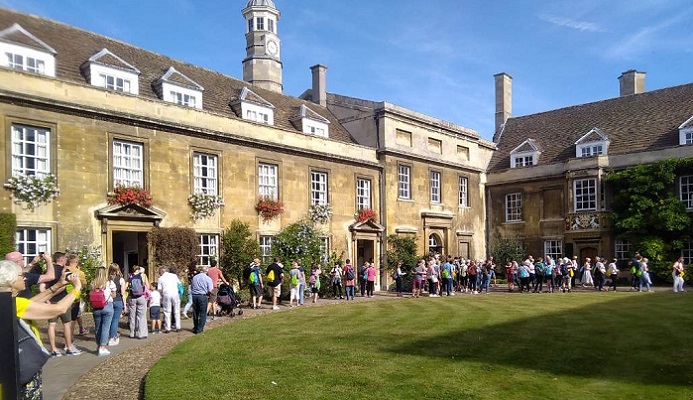 A cheque for £47,645 was presented to Romsey Mill and Arthur Rank Hospice Charity with funds being split evenly between the two local Charities.  Thanks to continued support from Cambridge’s local businesses, community groups and 135 passionate volunteers, every penny raised through walkers’ registration fees, participant sponsorship and donations, goes directly to these two charities. 2,000 walkers took part this year. Over eighteen consecutive years 35,000 people have now taken part in the event!

To celebrate the success, headline sponsor The Cambridge Building Society opened the doors of their Central Cambridge store on St Andrews Street to previous participants, volunteers and sponsors who gathered to reminisce about the highlights of this years’ walk, as well as new people and companies interested in getting involved in 2020.

Special guests at the celebrations included Janet Robertshaw and her friend, who were representing ‘Macca’s Meanderers’.  The team of 30, made up of Barclays’ staff and their families, raised £3050 in memory of their colleague Simon McCarthy, who was cared for by Arthur Rank’s Hospice at Home team before he died in December 2018.

Having experienced Bridge the Gap for the first time this year on 15 September, Sharon Allen, CEO of Arthur Rank Hospice Charity, commented: “It was an amazing day - we were so fortunate with brilliant sunshine. All of our fantastic supporters and the entertainment contributed to a great atmosphere. It was lovely to see friends of the Hospice, both longer term and newer connections, throughout the day and to see everyone having such an enjoyable time and then to hear consistently positive feedback as people returned from their experience of visiting the Colleges.  We would like to extend a huge thank you to all the walkers who took part! It is thanks to their support, and that of our sponsors, that we are able to raise a significant amount of funds for two charities that make very real differences to people living in Cambridgeshire.”

The Committee also offer their grateful thanks to the University of Cambridge, the event’s sponsors including The Cambridge Building Society, the Rotary Club of Cambridge, Cambridge Assessment, TTP Group, and Co-op, and all those who provided support, volunteers, publicity, refreshments and entertainment before, during and after the day.

The walk is very much a collaborative community event and this aspect remains integral to its success, as Neil Perry Chief Executive of Romsey Mill explains: “Bridge the Gap is a uniquely Cambridge event, and one which the team and volunteers from Romsey Mill greatly enjoy. Once again, this year’s Bridge the Gap was a fantastic demonstration of what real community partnership looks like and what it can achieve.   Bridge the Gap brings together people from all aspects of Cambridge life – businesses, Colleges, community organisations and individuals – to provide a great experience for walkers, who were able to access some of the most exclusive areas of the Colleges. It also helps to raise vital funds for our two local charities, as we work alongside people when and where they most need support. Thank you to everyone who took part or helped make Bridge the Gap such a success this year!”

Carole Charter, Head of Marketing at The Cambridge Building Society, concludes: Now in our 11th year as headline sponsors, we’re delighted to have played an active part in raising an incredible amount of money for two important local charities. Bridge the Gap goes from strength to strength every year and is a well-loved event for Cambridge residents, visitors and the team here at The Cambridge where we had over 150 team members and their friends and families take part!” 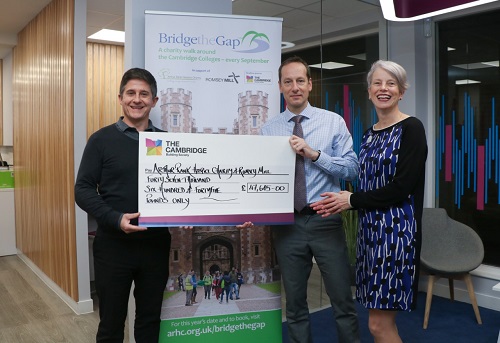 The Bridge the Gap Committee additionally extend their thanks to: members of the Society of Cambridge Tourist Guides who generously volunteered their time and expertise; Sing! Choirs, Jazzwave, The City of Cambridge Brass Band, The Blue Clovers and The Cambridge Lindy Hoppers for their amazing entertainment; Neil Whiteside from Cambridge 105 for being MC and announcer at Parker’s Piece; stall holders on the day who each made a donations from their takings, including Cuppa JoJo’s, Caffe Mobile, The Tin Kitchen and Nanna Mexico; Aristocaters of Sawston who supplied lunches for volunteers, who were present on Parker’s Piece or acting as route marshals; and each and every one of the volunteers  who helped make the event so safe and enjoyable, including those from the Rotary Club of Cambridge, the Co-op, Diamond Ladies (Saffron Walden), Cambridge Air Cadets and staff and volunteers from organisations forming the Bridge the Gap Committee.

If you would be interested in supporting next year’s Bridge the Gap walk, which will take place on 13 September 2020, please contact Arthur Rank Hospice Charity on 01223 675888 or email fundraising@arhc.org.uk.