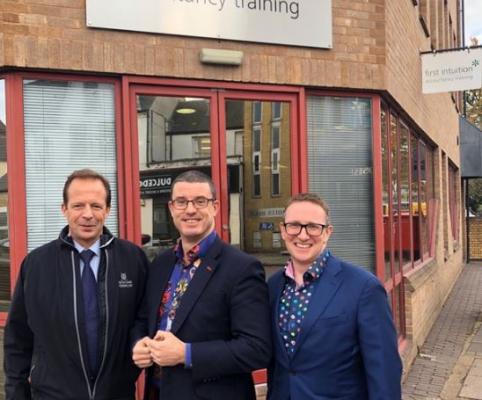 First Intuition Cambridge Ltd, an award-winning accountancy training provider, is expanding its premises by taking over the whole building it currently occupies in central Cambridge.

Following advice from Edward Dodson of Cheffins’ commercial department, the company, which opened in Cambridge in 2009, will add the second floor of the building on the corner of Hills Road and Glisson Road to the two it already leases to run tuition courses.

The opportunity to lease the whole building came about while lease renewal proceedings were taking place on the two lower floors. While the legal documents were being processed, Cantab Asset Management, who occupied the second floor, announced they had secured new premises at 50/60 Station Road.

With the attraction of control of common areas of the building and car parking, a decision was made to lease the whole of the 6,000 square feet property and, once Cheffins had negotiated favourable and beneficial terms on repair, First Intuition Cambridge Ltd completed a ten-year lease on the building.

Edward Dodson, a director in Cheffins’ commercial department, said: “It is great news we were able to secure this deal for First Intuition Cambridge Ltd to grow the business and on beneficial terms in a very landlord friendly market.

“The new lease with the added flexibility and control of the common parts and the sole entrance of the building will make First Intuition expansion in Cambridge all the more smoother.”

Gareth John, director at First Intuition Cambridge Ltd, said: “After spending the last ten years building the First Intuition business at 35 Hills Road, it is fantastic to not only be staying for another ten years, but to have taken on 50 per cent more space to cope with our continued growth.

“We look forward to supporting skills development for even more students and even more clients in the years to come. Working with Cheffins to renegotiate the lease terms made our life so much easier over a lengthy negotiation process.

“Ed Dodson’s dogged persistence has led us to a deal that I think is great for both us and the landlord.”