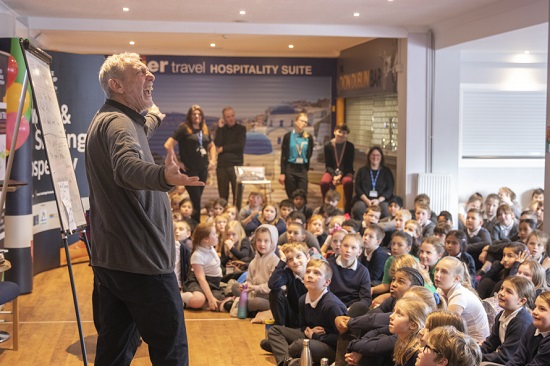 About 250 pupils from Fen Ditton Primary School and The Galfrid School joined the world-famous author to sing songs and to write their own poem about walking and cycling along the new trail at Cambridge United Community Trust on Monday morning.

This was followed by school assemblies in the afternoon before more than 200 people gathered at the Abbey Stadium in the evening for a celebratory event filled with songs and poems. Michael gave a special performance of his famous Chocolate Cake story before he cut a chocolate cake to official unveil the Chisholm Trail murals created by the children.

The youngsters’ artwork, which tells the story of the history of the Chisholm Trail route in the Abbey area, covers the hoardings along Newmarket Road – behind which work is ongoing to transform the trail into a fast, safe link to enable cyclists and pedestrians to travel from the north of Cambridge to the south of the city.

The Greater Cambridge Partnership is delivering the Chisholm Trail and has commissioned Historyworks to create the artwork and to engage with local schools and residents.

Construction is underway on the Abbey Chesterton Bridge, which is being funded by Cambridgeshire County Council. Work on the entire project will be completed in 2021.

Michael Rosen said: “It has been a huge pleasure to be back in Cambridge for creative performance sessions with local children, working with the GCP and alongside the team at Historyworks, to inspire school children to be proud of the place where they live.

“To encourage children to express themselves, putting their voices not just on paper, but to embody their ideas in rhythm and rhyme, learning to be confident to say words out loud, to sing them out and to tap them out in a rhythm, really helps with the creative process.

“By using their voices and embodying the story telling with actions, this gave them confidence to start a new poem which I co-composed with them about what you may see and hear on the Chisholm Trail which the children will finish in class this week.

“I was blown away when I went to see what they have achieved so far in illustrating local history on the new mural for the Chisholm Trail on Newmarket Road, and can’t wait to return to Cambridge as we encourage all the schools to embrace creative writing, poetry and song, celebrating local history and a pride in community too.”

Helen Weinstein, Artistic Director at Historyworks, said:  “The Chisholm Trail mural tells the story of the area from the Jurassic times to now, because it really matters to make people proud of where they live, to take schools and community groups on walks to discover the history beneath our feet, and for everyone to know that the story of Cambridge.

“Teaming up with Michael Rosen has been fantastic – he’s written poems and songs inspired by the history, so we have poems about the Jurassic Pterosaurs, the Leper Hospital, the railway coming in 1845, and the transformation of the landscape with industrialisation, like the child-friendly story of Coprolite Mining.

“All of these lines of poems about our history are now beautifully illustrated by children from local schools with contributions from the community at our summer events – so all the local families have ownership of the mural. Come and see it for yourself!”

The Chisholm Trail and Abbey Chesterton Bridge will enable people to walk or ride on a mostly off-road route making it easier and safer to get around the city and access green spaces.

Phase one of the trail focuses on the north section from Cambridge North to Coldhams Lane which will open up green spaces, including the privately-owned Barnwell Lakes and Cambridge Past, Present and Future’s Leper Chapel, creating an off-road green route between Stourbridge and Coldhams Commons.

Phase two of the Chisholm Trail, first proposed by cycling campaigner Jim Chisholm and his colleagues in the late 1990s, will see the trail follow the railway line and link Cambridge Station to Coldhams Lane.

Further information and details about the construction phase visit the project page.