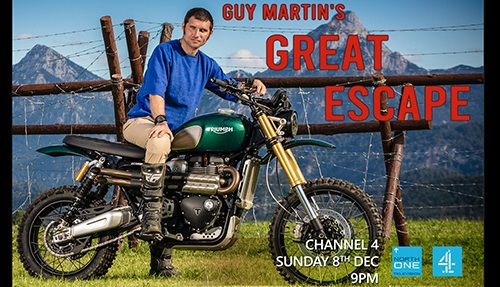 The Great Escape film is considered to show one of the most iconic motorcycle stunts in movie history. Now, nearly 60 years later, Cambridge engineer Dr Hugh Hunt helps motorcycle racer Guy Martin prepare to recreate the jump – with a little help from physics.

Together they discussed angles, speed, height and distance ahead of Guy’s attempt to recreate Steve McQueen’s famous motorcycle jump. With the help of live demonstrations and mathematical equations, Dr Hunt helped Guy consider various aspects of the jump, including learning how speed and the height of the ramp affects spin.

At the climax of The Great Escape, Steve McQueen's character Lieutenant Hilts steals a motorbike and attempts to jump two border fences into Switzerland. Hilts clears the first fence but then crashes and gets recaptured. Now, Guy wants to do what Hilts couldn't – by clearing both fences. The original bike used in the movie was a Triumph and Guy has converted and prepped a modern Triumph Scrambler 1200 for his big stunt – which, just like Lieutenant Hilts, he will have just one attempt at completing – in the exact field in southern Germany in which the original jump was made.