London Stansted Airport has outlined its plans to invest £35 million over the next eight years to help ensure that Uttlesford remains one of the best places in the UK to live, work and do business.

On 24 January Uttlesford District Council’s Planning Committee will meet to consider the details of the mitigation measures that are part of the planning application submitted by Stansted that, if granted, would enable the airport to grow over time to make best use of its existing runway and serve 43 million passengers per annum.

The granting of this planning approval would trigger a considerable investment from the airport in addition to its existing commitments and deliver significant improvements to the District’s transport infrastructure, educational provision and environment. The core elements of the £35 million investment include:

These measures sit alongside Stansted’s ongoing commitments to:

Chief Executive of London Stansted Airport, Ken O’Toole, said: “We have listened to the community from the outset and remain absolutely committed to delivering additional passenger growth in a sustainable manner, without an increase in the number of permitted flights and within a smaller noise footprint than our existing permission requires.

“The independently reviewed environmental analysis of our application is clear. It shows that our comprehensive package of community, transport and environmental mitigation adheres to the tests set out in the planning process and will enable the benefits of a thriving Stansted to be fully realised while actively managing any environmental impacts associated with our future growth.

“There is no denying that the airport delivers substantial benefits to the Uttlesford, Essex and East of England economies. This comes in many forms, but most notably from the 12,000 people employed across the 200+ employers at the airport, including over 2,000 Uttlesford residents. Growth to 43 million passengers a year will generate 5,000 more jobs at the airport and a further £1 billion of additional economic and social benefit.

“We have been working hard with the Council over recent months to better understand their concerns and have put forward proposals which are legally sound and present a proportionate mitigation package. We would hope the Committee take this on board, along with the advice they have received from their own officers and independent legal advisors when they meet in the coming weeks.”

In recent months, a number of high-profile organisations have urged Uttlesford District Council to avoid further delay in granting final approval for the airport’s plans to serve more passengers, including: 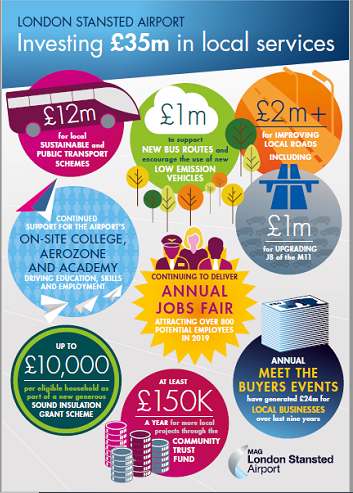