Europe’s 13 top car manufacturers will miss their 2021 targets and will face fines of more than €14.5bn, according to the annual forecast of car manufacturers’ performance against mandatory EU CO₂ emissions targets, published by PA Consulting, the global innovation and transformation consultancy.

CO₂ emissions are increasing and car makers must act

After four years of steady progress, PA’s research has revealed a step backwards. Emissions have increased across the board, mainly due to customers buying SUVs, strong demand for high-powered and heavier cars, lack of low-emission options in showrooms, and shifting preference for petrol cars after the diesel scandal.

Some car makers will see penalties high enough to have a material impact on their profitability and reputation. Volkswagen could be fined as much as €4.5 billion due to its high sales volumes across Europe. Equally, previous top performers such as Renault-Nissan-Mitsubishi, Volvo and Jaguar Land Rover look set to fall short. Even Toyota, the market leader in hybrid vehicles, is forecast to miss its target. Jaguar Land Rover would face the biggest impact from fines based on EBIT (93 million Euros, representing 400 per cent of its 2018 profit).

Michael Schweikl, automotive expert at PA Consulting, says: “Despite this ‘four steps forward, one step back’ situation, the good news is that there are many options open to car makers to reduce emissions and minimise future fines. But the urgency of the situation means they have to act quickly.

“Car makers are running out of time to improve performance quickly enough to avoid fines. Marketing, sales and pricing strategies that increase the take-up of low-emissions vehicles will be essential in getting manufacturers closer to the targets.

“Possible solutions could include:

“But they need to take these actions in 2020 to reduce CO2 emissions further in the future and win new customers.”

PA ranks each manufacturer by their CO₂ performance forecast for 2021. Toyota remains the best performer, PSA is now second, overtaking Renault-Nissan-Mitsubishi. Volvo, Volkswagen, Daimler and BMW are further from their target than last year. Jaguar Land Rover still has the highest CO₂ emissions and is now in danger of missing its specific target.

The scale of the challenge facing car manufacturers is clear. PA’s analysis shows that they would need to sell more than 2.5 million extra battery electric vehicles to stand any chance of meeting their targets, a 1,280% increase by 2021. Production capacity constraints make this almost impossible – Volkswagen’s new production lines for the ID3, for example, have a capacity to produce 100,000 units in 2020. 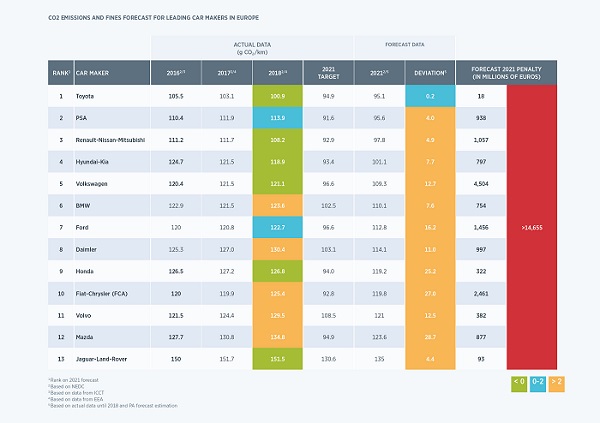 In a world where emissions regulations are only going to get tougher, Michael Schweikl concludes, this is a challenge that cannot be ducked: “Car makers will need to adapt to an enormous change in what they do as they move from the technology of combustion engines to low-emission electric vehicles. While much exciting technological development is already underway, manufacturers cannot underestimate the complexity, cost and cultural change required.”

For a copy of the full report, visit http://www.paconsulting.com/co2