The power of words 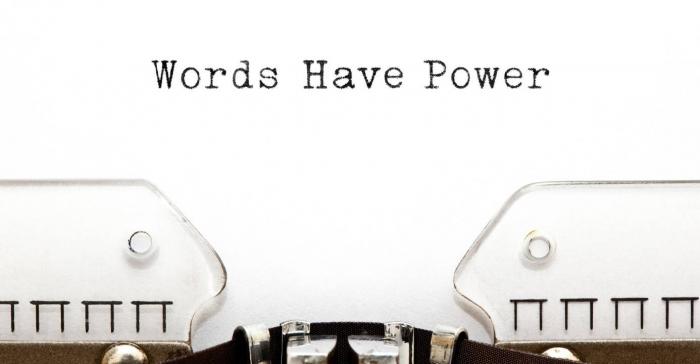 Some words are so powerful they are banned.

Arrested!
I remember the first time I met an Extinction Rebellion activist who explained the name and philosophy: as veteran campaigners they feel a true attitude of rebellion is needed to ‘wake the masses’ and prevent ‘extinction’. In order to drive action in the face of cause-overload and complacency, large-scale, long protests and mass arrests were their prime tactic from day one. As all good subeditors know, ‘rebellion’, ‘extinction’, and especially ‘arrested’ are loaded words that prompt strong images, tweet well and become headlines precisely because they pack an emotional punch.

In these crowded media times, the soundbite is often best reduced to one word to drive headlines, rise out of the crowd and get attention.

Scary
Words that have found the spotlight recently include those of Professor Sir David King. The former Government Chief Scientist and member of the 2014 Intergovernmental Panel on Climate Change (IPCC) has spent years presenting scientifically strong evidence that climate change is real and significant. Yet he caught the spotlight more strongly with one word: he said he found recent extreme weather events ‘scary’ because they showed the IPCC’s more extreme scenarios were actually happening, and sooner than predicted. That one word grabbed headlines and got support from a range of other senior scientists, probably because of the undeniable emotional impact. Scientists often seem dry and boring in the way they write, but they publish balanced words and qualified claims because they are trained that way, they know their words will be most closely scrutinised by academic peers and opponents, with careers built or broken on finding factual error or a chink in an argument…. But an honest reaction to the dry facts was what got more attention. As physics Prof Jo Haigh from Imperial College London said: “David King is right to be scared – I’m scared too. We do the analysis, we think what’s going to happen, then publish in a very scientific way. Then we have a human response to that… and it is scary.”

Vagina
Society seems more sensitive to mentioning the terms for female body parts than for male ones. Twitter, Facebook and Instagram recently blocked several adverts promoting a doctor's book about vaginal health, according to US publisher Kensington. Obstetrics expert Dr Jen Garner’s Vagina Bible – a straightforward health guide – had the majority of its social media ads banned seemingly because it uses the ‘v’ word, although Facebook claimed some were initially banned due to ‘human error’ but then permitted. Publisher Kensington Books claimed that Twitter said the rejected sponsored tweets were "promoting adult sexual products and services" or used "inappropriate language". However, several were approved once the title or the words ‘vagina’ or ‘vaginal’ were removed. Ironically of course, the book received far more international coverage because of the bans, and a BBC blog also included images of the rejected ads.

These might seem far-fetched examples compared to your business messages, but they certainly illustrate the power of a strong point of view, backed by facts, and the use of powerful single words. When we’re thinking about social media campaigns, ‘newsjacking’, thought leadership or conventional headlines, we will look for the emotionally-charged word that we can justify. It’s our job – so while these are perhaps extreme examples, you can quite often expect a frank conversation with us to dig into where we can find emotionally-loaded words and how far we can push the envelope. At times we are here to help your message reach people, and sometimes that means causing a ripple in a larger pond than you’re used to, especially in an age of overload and ‘infobesity’.