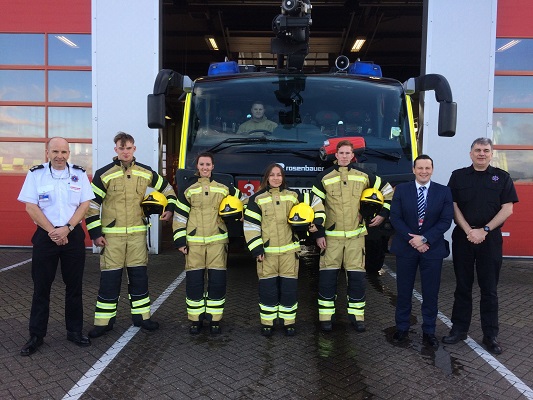 Two women are blazing a trail at London Stansted after becoming the first female firefighters to join the ranks of the airport’s fire and rescue service.

Hannah Inggs and Amber Popham join Finn Edwards and Charlie Fry as the first intake of London Stansted’s newly created firefighter apprentice scheme. The fab four sparked off their careers when they were officially welcomed into the service in early January and will now begin a 22-week training course before joining operational duties from June.

Their training includes eight weeks at the Fire Service College in Moreton-in-Marsh, Gloucestershire, and 10 weeks on the job training at Stansted. The course concludes with two weeks at the International Fire Training Centre at Teesside Airport, before completing two weeks of assessments back at Stansted.

In addition to the specialist airport firefighter course, the recruits will also be trained as community firefighters and will learn how to handle anything from house fires, floods and road traffic collisions to chemical spillages and community fire safety initiatives.

Hannah Inggs from Chelmsford said: “I am really proud to have been selected as one of the apprentices at Stansted Airport. It has given me the opportunity to embark on a career I’ve always wanted to do.”

Amber Popham, who lives in Rochford, said:  “I’m extremely proud to be on the scheme and can’t wait for the experiences and opportunities that it’ll give me in the future.”

Braintree resident Finn Edwards, said: “The firefighter apprenticeship is perfect for me because I enjoy working practically and did not want to go to university and knew a role in the fire service would give me the opportunity of a good career.”

Charlie Fry, who lives in Romford, said: “The chance to develop and study for a career on the job really attracted me to the role. I’ve only been here a short while, but no day is the same in terms of what you’ll be doing which keeps you on your toes, it’s a challenge and I would recommend it to anyone.”

“London Stansted’s new firefighter apprenticeship scheme will allow us to provide a route into the service for young people from a variety of backgrounds to develop as firefighters where they may not have always considered the fire service as a career before.

“The scheme also offers young people the chance to begin their career on a structured and supported programme as an alternative to going to university and is in addition to our proud track record in recruiting apprentices at the airport, particularly within our engineering and customer service teams.”

The new apprentice scheme was introduced following the launch of the government's 'Operational Firefighter Apprenticeship', which sets out the standards for fire apprentices in the UK.  It also builds on Stansted’s extensive range of educational and development opportunities on offer at the airport which includes the Aerozone, Employment and Skills Academy and the pioneering Stansted Airport College.

The airport is already the biggest single employment site in the East of England and home to 12,000 employees. With passenger numbers touching 28 million this year, new airlines like Emirates and Air India arriving and a multi-million-pound transformation project underway, the airport is looking to increase the number of apprentices over the coming years to serve a growing airport.