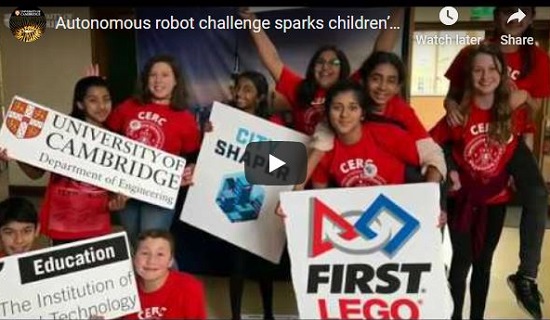 Cambridge University's Department of Engineering hosted a series of robotic-themed challenges as part of a science and technology competition, which attracted more than 200 school children.

The Cambridge regional heat of the Institution of Engineering and Technology (IET) FIRST® LEGO® League, compered by Dr Hugh Hunt, Reader in Engineering Dynamics and Vibration, saw teams of up to 10 children (aged between nine and 16) build and programme an autonomous robot using a LEGO® MINDSTORMS® kit, before taking on a series of challenges. These were split into four parts: the Robot Game, Robot Design, Core Values and the Innovation Project.

The theme for this year’s FIRST® LEGO® League was ‘CITY SHAPER’. The playing field mats that the teams competed on included a number of different architecture-themed LEGO® structures to represent the spaces in which people live. The children programmed their autonomous robots to interact with these in order to complete a variety of missions and score points.

Team WALL-EV3 from Lakenheath High School won the Robot Game having scored the most points during the missions.

Team BIONIC from Bedford Modern – who were praised for their robot design and programming skills – scooped the Robot Design Award.

The Innovation Project Award went to Roboclub from Fulbourn Primary School. As part of this award, teams were invited to explore issues such as transportation, accessibility and natural disasters, before presenting a solution to the problem.

Event compère Dr Hugh Hunt said: “There are a shortage of engineers in the UK and so it's really important that we encourage children to embrace robotics, programming and other elements of engineering early on in their lives, as the chances are they will take that love for engineering with them into their future careers."

Lowri Walton, IET Education Manager – FIRST® LEGO® League, said: “It is so important that we work together to engage young children in STEM and help them build important life skills that they can use in their future careers. We are always blown away by the talent that we uncover at the regional heats. A huge congratulations to teams CERC and Aquarius, we’re looking forward to welcoming you both to the England and Wales final in February.”

James Chapman, VP & GM, Voice/Music/Wearables Qualcomm Technologies International, Ltd., added: “The role that the FIRST® LEGO® League tournaments plays in introducing young people to technology and engineering is phenomenal. It’s been fantastic to see so many young people from Cambridgeshire engaged and excited about STEM at this year’s regional heat.”

Watch a video of the event>>>