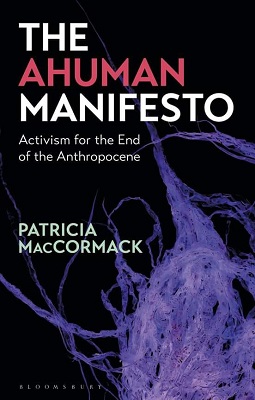 An important new book challenging how we view the human race, and the future of humanity on Earth, will be launched in Cambridge tomorrow (Wednesday 5 February).

Written by Patricia MacCormack, Professor of Continental Philosophy at Anglia Ruskin University (ARU), The Ahuman Manifesto (Bloomsbury) is a radical call to action.

The book asks what the relevance and benefit of human life to Earth actually is. Covering a range of contemporary issues including climate change, animal rights, and veganism, the book suggests an extreme solution to the current ecological crisis – human extinction.

In its final chapter, The Ahuman Manifesto looks at developments since entering the age of the Anthropocene, including the “capitalist enslavement of human and nonhuman organisms to the point of ‘zombiedom’”. It goes on to argue that we’re already “apocalypse citizens” and that a gradual phasing out of human life should be embraced.

Professor MacCormack said: “Far from advocating mass death, genocide or eugenics, my manifesto is antinatalist.  It boycotts human reproduction due to the damage humans have perpetrated on the Earth and its other inhabitants.

“The manifesto simply asks that humans no longer reproduce – no life is lost, no being is mourned. If we no longer reproduce, we can care for all inhabitants already here, human and nonhuman, as well as care for the Earth itself by mitigating the damage already caused. It’s an activism of care.

“It questions the value of human exceptionalism, asking are humans really the 'best' forms of life, or should we dismantle our understanding of life as a hierarchy for a more ecological, interconnected scheme of living things?

“My manifesto sees a joy in living the lives we have and developing strategies of care for the Earth’s next chapter. This is an Earth that’s allowed to thrive not in spite of but because of the reduction and eventual absence of humans.”

The launch of The Ahuman Manifesto will take place at ARU’s Cambridge campus on Wednesday 5 February (12.15pm).

Professor MacCormack is hosting a mini-symposium on posthuman futures, and will be joined by guest speakers, including Professor Lisa Blackman of Goldsmiths, University of London. Please contact patricia.maccormack@anglia.ac.uk for further information about the event.