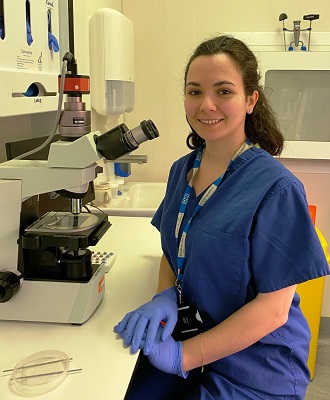 A young scientist who is part of a team investigating the causes of male infertility has won a prestigious award.

Delia, 24, impressed senior scientists with study results that establish the optimum moment for a common and cost-effective test – called peroxidase staining – to be deployed on semen samples with the aim of differentiating seminal white blood cells from other ‘’round cells’’.

It needs to be done when round cells are at a very specific threshold number ( ≥1.0M RC/ml of semen)  and gives at least a 95 percent accurate diagnosis of leukocytospermia. It is the name given by the World Health Organisation (WHO) to a defined number of white blood cells (≥ 1.0M WBC/ml of semen), which are considered a possible risk factor for male subfertility.

The work, which follows years of controversy around what threshold values to use for peroxidase staining and leukocytospermia diagnosis, follows the semen analysis of 530 men referred to Cambridge IVF, which is part of Cambridge University Hospitals NHS Foundation Trust.

Delia said: “Male infertility is one of the main causes behind millions of couples’ failed efforts to conceive and its accurate diagnosis is dependent upon a thorough microscopic examination of the man’s semen.

“Among round cells, white blood cells carry the most significance because their increased levels are considered a sign of urogenital inflammation and infection.

“To our knowledge, this study is the first to establish a round cell threshold value above which peroxidase staining can be performed with at least a 95% chance of an accurate diagnosis of leukocytospermia.

“We also observed a significant reduction in sperm count when white blood cells reach and exceed the WHO proposed leukocytopsermia threshold. This further highlights the importance of accurately diagnosing leukocytospermia during the management and treatment of subfertile men.’’

Professor Iwan Lewis-Jones was a national lead in the field of andrology and training junior doctors in fertility medicine. A yearly memorial prize for young scientists was established following his death in 2016.