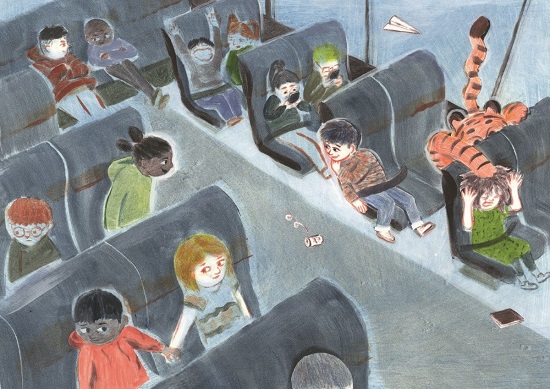 Artwork by some of the rising stars of world children’s book illustration will go on show in Cambridge this week, when the annual MA Children’s Book exhibition opens to the public at Anglia Ruskin University (ARU).

The exhibition, which begins on Wednesday (19 February), features a collection of the best work from each of this year’s graduating students from the MA Children’s Book Illustration course at ARU.

The first course of its kind in the UK, it began in 2001 with a handful of British students, all part-time, and has now grown in both size and reputation with currently over 150 students from 25 countries.

And over the past 12 months, students and alumni have enjoyed a remarkable run of success in the UK’s largest illustration awards, including the Gold Medal at the Society of Illustrators Original Art awards; the STEAM Children’s Book Prize; and the Independent Booksellers Best New Illustrator 2019.

For the fourth year running, the prestigious V&A Student Illustrator of the Year prize was won by an ARU student, with Sophie Burrows following in the footsteps of Joseph Namara Hollis (2018), Beatriz Lostale Seijo (2017) and Kate Milner (2016).

Elsewhere, graduates from the course achieved a clean sweep of the shortlists of both the Templar Illustration Prize and the Children’s Book Illustration category of the Batsford Prize, the latter being won by current student Severus Lian.

Recent graduate Puck Koper has just won the Bologna Opera Prima Award for best debut picture book, and current students Yan He, Kin Lam and Anne Rose Kleiss, along with several graduates, have been accepted for the 2020 Bologna Illustrators Exhibition.

Shelley Ann Jackson, Course Leader for the MA in Children’s Book Illustration, said: “Each year our students impress and surprise us with their creativity and innovation, and this year is no exception.

“The great diversity in the projects and visual languages included in this year’s exhibition is the result of the remarkable drive and commitment of this cohort.

“This year’s Sebastian Walker Prize for Picturebooks went to Ellan Rankin and the new MA CBI Printmaking award went to Chris Knight. Both Ellan and Chris have displayed innovative approaches to illustration technique and both are incredibly deserving of their awards.”

The MA Children’s Book Illustration exhibition will be on show at the Ruskin Gallery, on ARU’s Cambridge campus, from 19 February until 28 February (10am-4.30pm). The exhibition is open to the public and entry is free.