Red alert for the events industry 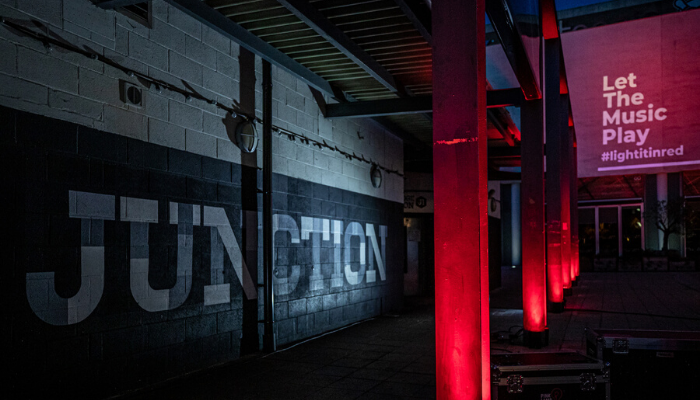 The team of event professionals who illuminated many Cambridge landmarks in blue during lockdown has returned once again. This time it was something of a personal mission.

Choosing two of the city's most prolific grassroots music venues, Cambridge Junction and The Portland Arms, the #shinebright team highlighted the current struggles of the event industry by bathing these buildings in red.

Since early March, the £5.2 billion per year industry has been mostly without work as events came to a sudden standstill leaving close to 700,000 people dormant. With many events ground to a halt before lockdown, venues, suppliers, and other workers within the event industry were left with nowhere to turn. To some, it felt like the final curtain.

Events were the first to stop and will be the last to start again.

With yesterday’s government announcement of a rescue package for the arts sector many smaller venues, suppliers, freelancers and others in the event industry hope they won’t be left behind.

"With a very welcome announcement from the government regarding a lifeline, it’s now important to see that everyone gets looked after. Having attended, worked, and performed at many events at grassroots venues across the country, we know how vital these institutions are, how much they are needed, and how much they would be missed should they have to close" said Justin Crane, Director of The Crane Event.

Matt Burman, CEO and Artistic Director at Cambridge Junction. commented: "Arts centres, music venues and theatres across the country are being drastically affected by restrictions necessary in preventing the spread of COVID-19. We are hugely missing all our audiences, are desperate to be able to support artists better, and are massively concerned for the networks of freelance creatives and production staff whose livelihoods are dependent on their work with us. We are grateful for the news of an ambitious package of government support for organisations. However, we need to continue to lobby for similar support for the independent companies, freelancers and self-employed artists, technicians and creatives vital to our programmes and our industry, and work harder to tackle inequalities in our sector and the communities in which we work. For that reason, we are lighting Cambridge Junction in red tonight." 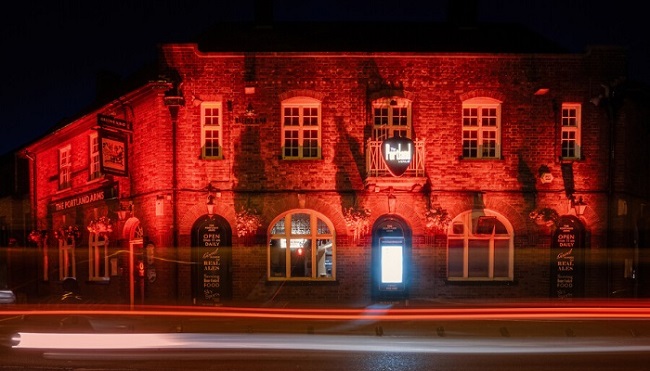 Steve Pellegrini, landlord of The Portland Arms (above), said: "As one of Cambridge’s smallest yet most popular venues, The Portland Arms stands proud in being a staple for bands starting out and perfecting their craft. From local bands such as Lonely the Brave and The Broken Family Band, as well as countless others, our stage has been a stepping stone for them before going on to gain national recognition. The Portland is also a key venue for the touring circuit with local promoters like Green Mind using our space to bring national bands such as Mumford and Sons and The 1975 to the city. The venue has been massively affected by the lack of events over the past few months. The announcement is a welcome relief, but we hope we’re not forgotten and are still here to welcome artists when we can open our doors as a live music venue once again."

Light It In Red is a UK-wide campaign illuminating over 600 venues during a single evening to bring light to the situation of the events industry during the COVID crisis. Cambridge’s contingent was made up of the passionate #ShineBright team: The Crane Event, JMPS, Pink Lamp, Blueshed and JezO’s Events Ltd.