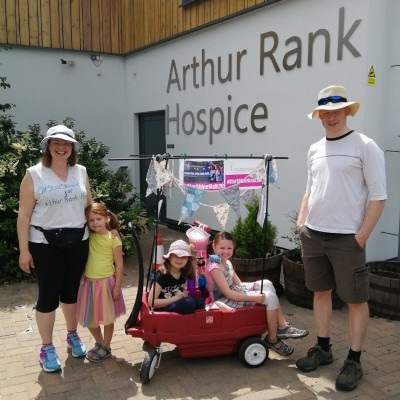 Nearly 300 supporters took part in Arthur Rank Hospice Charity’s first-ever virtual Star Shine Walk last month, raising an incredible total of more than £33,500!!  The annual walk sponsored by The Cambridgeshire Care Home, is one of the Hospice’s most important fundraisers and had to be quickly adapted in response coronavirus and the government’s guidelines on social distancing.

Historically the 10 mile walk starts and finishes at Shelford Rugby Club, taking in the Cambridge's historic streets at twilight. Instead participants were invited to walk ‘shoulder to shoulder with Hospice staff’, by walking 20,000 steps any time between 23 May and 6 June. Over £405,605 has now been raised by the event since it started in 2008.

In solidarity with supporters, frontline care and supporting teams based at the Hospice at Shelford Bottom and the Alan Hudson Day Treatment Centre in Wisbech also took part, alongside the Charity’s CEO Sharon Allen.  Together they accumulated far more than 20,000 steps whilst at work the day before the official event launched.

Well-loved celebrity supporter of the event, Cliff Parisi - known for playing Fred Buckle in ‘Call the Midwife’ and previously Minty in ‘EastEnders’ -  generously lent his good-humoured support to bolster the event.  He took to social media, as the events team counted down towards the start of the walk, using his charming charisma and a red wig (!) to encourage people to take part, despite the change in format.

Arthur Rank Hospice Charity’s events team was impressed by the sheer energy and creativity of participants. The Lovewell Family, of mum, dad and three young girls, walked from their home in Sawston to Arthur Rank Hospice and back again, dragging a cart with them in case of tired legs on the return journey. Like many of those who take part in the Star Shine Stroll, they were walking in memory of someone they loved – their Mum and Nanna who was cared for by the Hospice.

Over 30 members of Sing! Choirs, based in Cambridge and Ely, created their own ‘Sing ’n’ Walk’ to raise vital funds for the Hospice. Their collective effort raised so much in sponsorship that their fearless leader, Kathryn Rowland, had to fulfil her promise of doubling the distance in acknowledgement of the generous support their team had received for the Charity – so walked 40,000 steps!

Angeline Liles, Events Officer, comments: “We’re so grateful for the way in which everyone embraced the new plans for this special event! Every single person who counted their steps for our Star Shine Walk this year, and every person who made a donation, has made a really positive difference for those we care for and support.  Our original target was £20,000, so we’re unbelievably proud of all our Team Arthur family who, by putting their best foot forward together, smashed that target by over £13,000! A true team effort!”

Arthur Rank Hospice Charity would like to offer its heartfelt thanks to everybody who took part and contributed to the funds raised, particularly headline sponsors The Cambridgeshire Care Home, who not only made the event possible but also had teams of enthusiastic staff and residents each accumulate 20,000 steps over the two-week period. Grateful thanks is also extended to Nanna Mexico and Clare Jones Floral Design, who kindly sponsored the virtual ‘mile markers’.

The Charity is planning to host a celebration evening for event participants once it is safe to do so, where walkers will be personally thanked, awarded their well-deserved medals and be treated to the (all-important) Star-Shine-Walk-special bacon rolls (or vegetarian equivalent)!  In the meantime the events team are busy preparing for a virtual version of Bridge the Gap alongside partner charity Romsey Mill and the Bridge the Gap committee. Watch out for further updates on this September walk, which will be a super alternative to the traditional one-day event; a walk with a difference!

Arthur Rank Hospice needs to secure £8.66 million every year to deliver services free of charge to patients in Cambridgeshire living with an advanced serious illness or a life-limiting conditions, and their loved ones. About half of this currently comes from statutory sources, with further funds raised thanks to the wider local community, through events such as Star Shine Walk and Bridge the Gap.