Rocketman launches at drive-in cinema for EACH 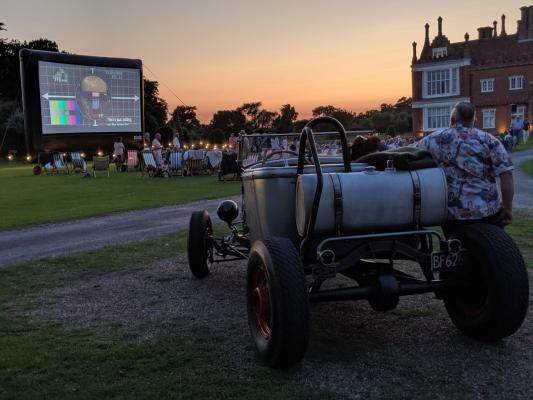 Rocketman, the biographical film based on Elton John’s life and career, will be featured at Burwash Manor, near Cambridge, by The Star & Mouse Picture Show in aid of East Anglia’s Children’s Hospices (EACH).

The drive-in cinema on Saturday 8th August promises to be full of fun, with DJ sets, car bingo, quizzes, live music and food and drinks before the film starts at sundown.

Eleanor Lyons, Star & Mouse Director and Producer, said: “We’re utterly delighted to be teaming up with EACH. The work they do is fantastic. We’ve been keen supporters of the charity for a long time and are thoroughly excited to be producing an event for such a good cause. We’re very excited for what’s to come.”

Becky Redbond, EACH Events Fundraising Manager, said: “We’re really excited to be working with Star & Mouse screening such a popular film as Rocketman and have a fantastic night ahead! It will give us all the much-needed social experience we’ve been craving for months and from a safe social distance at the same time.”

Rocketman is a 2019 biographical musical film based on Elton John’s life and early career. The film follows him in his early days in England, as a prodigy at the Royal Academy of Music, and the transformation from shy piano prodigy into international superstar.

All Star & Mouse drive-in films are powered with the use of FM technology, allowing people to watch on a giant 52ft (15.8m) airscreen cinema installation from the comfort of their cars while listening to the audio through their radio.

Gates will open at 7.30pm, with the two-hour long film starting at sundown.

Tickets start at £25 for a car with two passengers. To book and for more information about the event visit: Each.org.uk/cinema-cambridge

EACH supports around 450 families of children and young people with life-threatening conditions, including around 100 bereaved families, at any one time. The charity has taken a considerable financial hit during the COVID-19 pandemic as a result of shops being shut and fundraising activities being postponed or cancelled.