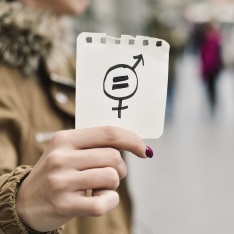 A new 42-country study has found that the more gender egalitarian the country, the less likely men are to support women’s causes.

The study, published in the European Journal of Social Psychology, was led by Dr Natasza Kosakowska-Berezecka from the University of Gdańsk, Poland, and involved a team of experts including Dr Magdalena Zawisza of Anglia Ruskin University (ARU), who was a member of the lead research group.

Gender equality benefits both men and women at individual and society levels.  It is associated with greater human rights observance, higher levels of happiness and wellbeing, and better physical and mental health, in addition to greater relationship satisfaction and economic benefits, including higher average levels of GDP.

The new research is the largest study on this topic ever undertaken, forming part of the Towards Gender Harmony project, and involved 6,734 men from 42 nations ranging from Norway, ranked second out of 153 countries for gender equality in the World Economic Forum’s 2020 Global Gender Gap Index (GGGI) to Pakistan, ranked 151st.

The researchers found, regardless of nationality, that the more men believe in “zero-sum” thinking – that gains for women equate to losses for men – the less they are inclined to support gender equality and are more likely to express attitudes of hostile sexism.

Counterintuitively, the study also found that the higher the national level of gender egalitarianism, the less men are willing to engage in activities such as signing petitions in favour of workplace gender equality, endorsing gender egalitarian political candidates, and using social media to raise awareness about gender issues. Norway, the Philippines, and Ireland were the most egalitarian countries (according to their GGGI scores) included in this study.

Dr Zawisza, Reader in Consumer and Gender Psychology at Anglia Ruskin University (ARU), said: “Some men view women as competitors rather than allies, and our research found that men, regardless of their nationality, withdraw their support for gender equality when they think that women’s gains threaten their own status.

“What is particularly interesting is that higher levels of gender equality within a country appear to have the effect of demotivating men from supporting gender equality causes. This could be due to a perceived threat to men’s masculinity or men’s belief that women are doing perfectly well on their own and do not need any extra help.

“Although we are seeing more women in senior management and executive roles, globally women earn 21% less than men and hold only 29% of the positions of power. This ‘zero-sum’ thinking, where gains for women equate to losses for men, remains a key barrier to further improvements in equality. Instead, ‘her gain equals his gain’ thinking needs to be promoted if we are to move towards gender harmony.”

More information about the Towards Gender Harmony research is available via the project website https://towardsgenderharmony.ug.edu.pl/