How science and innovation are helping tackle COVID-19 testing 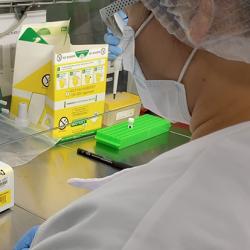 In April 2020, the University of Cambridge joined forces with AstraZeneca and GSK to create the Cambridge Testing Centre to boost the UK’s COVID-19 testing capabilities through innovation and cutting-edge technology.

The University has been able to share its world-leading research expertise with the innovation and robotics know-how from its two pharmaceutical partners to create a new, high-throughput Centre at our rapidly repurposed Anne McLaren Building.

Working together at speed

Forming a collaboration between the University, AstraZeneca and GSK and the rapid creation of a state-of-the-art testing facility has been a huge undertaking and is testament not only to the strength of life science in the UK, but particularly to the work happening in the life sciences cluster in Cambridge.

The Cambridge Testing Centre is a real endeavour of partnership and ingenuity and is just one example of how organisations across the life sciences sector are working together to advance healthcare and science.

Hundreds of volunteers were recruited and trained from across the three organisations to get the Centre up and running, including researchers from the University. Each volunteer stepped forward at a time of national crisis with their own reasons for wanting to contribute to the COVID-19 testing programme.

Innovative robotics and automation were installed and an entire supply chain was sourced and implemented to ensure the testing facility was both resilient and highly effective. All of this was done in just five weeks, an operation which would usually take six months

The Centre – which soon after its launch was brought into the Government’s national diagnostic lab network – is a real example of collaboration at its best, combining the drug discovery and technology expertise of the two pharmaceutical partners with the University’s leading interdisciplinary research capabilities.