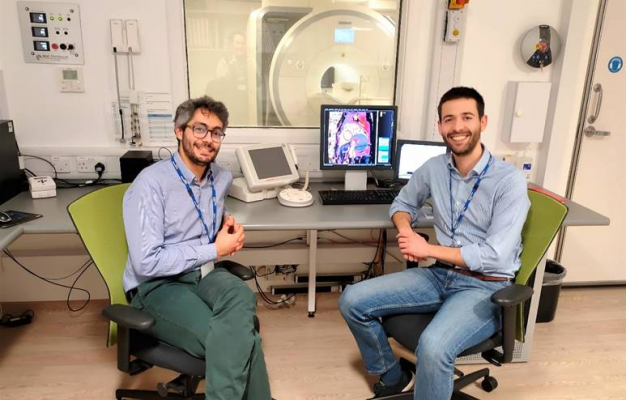 Research with Cambridgeshire and Peterborough NHS Foundation Trust (CPFT) has uncovered changes to heart structure and function in people with schizophrenia, that could increase the risk of heart disease and mortality.

The research team’s findings are published in The British Journal of Psychiatry and they won the Royal College of Psychiatry’s Article of the Month in August for vital work investigating physical health issues in schizophrenia, a severe long term mental health condition.

Working with the research team, the study was made possible by 40 patients with schizophrenia who volunteered to take part, matched by an equal number of healthy controls from the general population. Their hearts were expertly scanned with cutting edge technology at the Robert Steiner MR Unit.

Emanuele said: “We have known for many years that people who suffer from schizophrenia can die younger than expected, up to 20 years younger than the general population.

“To help address this disparity, we investigated if physically healthy people with chronic schizophrenia show cardiac changes compatible with increased risk of heart disease and death.

“We found changes in schizophrenia which were independent of conventional risk factors for heart disease, such as age, sex, ethnicity, body weight and height, blood pressure, smoking and physical activity.

“People with schizophrenia showed smaller and chunkier hearts than healthy controls, a condition called concentric heart remodelling. These changes are similar to those seen in ageing, and have been shown to increase the subsequent risk of cardiovascular death.”

Emanuele added: “I will be investigating what drives these changes in my future research, considering the role of genetics and inflammation. I hope to be able to contribute to reducing the mortality rate for people living with schizophrenia.”

In a previous study, the team found that muscle tissue in the hearts of people with schizophrenia reveals changes seen in inflammatory conditions, and this latest research shows how the structural and functional differences elevate the risk of heart attacks and strokes, compared to healthy people.

Dr Chris O’Loughlin, CPFT Consultant Psychiatrist, Royal College of Psychiatry Fellow and Head of School of Psychiatry for Health Education East of England said: “The strong tradition of high quality research being produced by trainees in the eastern region is demonstrated again by Dr Emanuele Osimo, an academic higher trainee with CPFT. With his research team, he investigated the relationship between schizophrenia and cardiac function - crucial work needed to support patients’ physical condition as well as mental health, in an area that has received little attention so far.

“Emanuele presented his research at the Royal College of Psychiatry’s International Congress last year and I’m pleased that it now receives a wider audience in the British Journal of Psychiatry. We are proud to support academic training in psychiatry in the East of England and Dr Osimo's work showcases the best of ongoing psychiatry research to benefit our patients.”

CPFT is a leading NHS Trust for studies investigating the links between mental and physical health, delivering research with care in partnership with the University of Cambridge Medical School and Department of Psychiatry. Trainees from around the world join the Trust every year to work with world experts and help to improve services and care for patients.