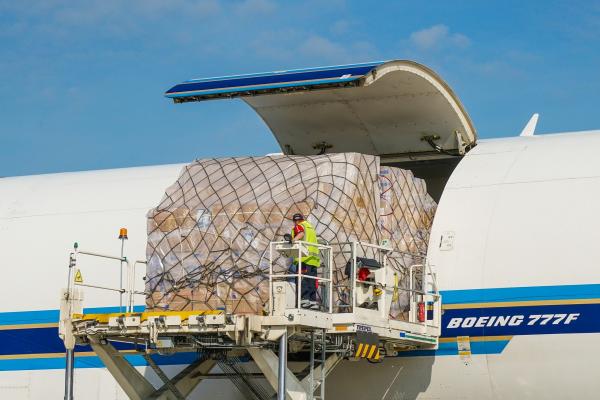 People’s increasing reliance on ecommerce during the pandemic, coupled with a reduction in passenger flights, has driven significant growth in air cargo at the Manchester Airports Group (MAG) owned East Midlands and London Stansted airports.

The current climate has turbo-charged the shift to online shopping, the impact of which is been felt at both London Stansted and East Midlands Airports (EMA). Earlier in the year, figures from the Office for National Statistics showed that the proportion of UK shopping carried out online rose from 19% in February to almost 33% in April as lockdown restrictions took hold.

Over the summer months, traditionally the quieter time of year for air cargo, volumes at both EMA, home to the UK’s largest dedicated air cargo operation, and London Stansted were significantly up on the same time last year. In July and August, EMA saw an increase of 21.2% and 18.5% respectively, while volumes at London Stansted increased by 43.6% and 25% in the same period.

The shift towards dedicated air cargo operations is also being driven by the lack of traditional belly-hold operations, where goods are transported in the baggage hold of passenger aircraft. With many airlines scaling back long-haul passenger operations in recent months, the availability of belly-hold capacity has reduced significantly to key markets, especially on popular routes to the US. For example, during June, July and August there has been an average of 60 additional cargo flights to and from East Midlands Airport and the US and, most notably, a 120% increase in the volume of goods travelling between EMA and JFK airport in New York. In addition, there are extra weekly flights between London Stansted and the US.

These volumes are eclipsing what would normally be expected during the weeks leading up to Christmas, which is traditionally the busiest time of year for dedicated air cargo and express freight airlines. It comes after the airports played a central role in transporting essential goods during the pandemic, with shipments of vital medical supplies and PPE helping add to the increase in volume.

Group Aviation Director for MAG, Aboudy Nasser, said: "The last few months have seen a seismic shift in the way we live our lives. While much has been made of the changes to the way people travel, behind the scenes our airports have been leading the charge in helping the logistics sector adapt to rising demand for dedicated air cargo and changes in the way goods are transported. This underlines the vital role MAG airports play in supporting the UK economy as it gets back on its feet, and the critical role of air cargo in moving essential products quickly across the globe. We look forward to continuing our work with this important sector as it prepares itself for ever-increasing demand in the months ahead."

Denise Rossiter, Chief Executive of Essex Chambers of Commerce, commented: "Stansted is generally thought of as somewhere to start your holiday or perhaps a business trip to an ever growing number of destinations across the globe. These figures show its importance for exporters and importers too and how it is increasingly a major contributor to not just the Essex economy but that of the UK generally and why it is so important to businesses in Essex. I congratulate MAG and all at the airport on this achievement and look forward to seeing continuing growth in the future."

Dr Ann Limb, Chair of the UK Innovation Corridor, added: "These figures clearly demonstrate the importance of aviation to the UK and regional economy. Airports like Stansted are playing a huge role in the economic fight against COVID19 and during these difficult times this news is a major boost for the London - Cambridge Innovation Corridor."