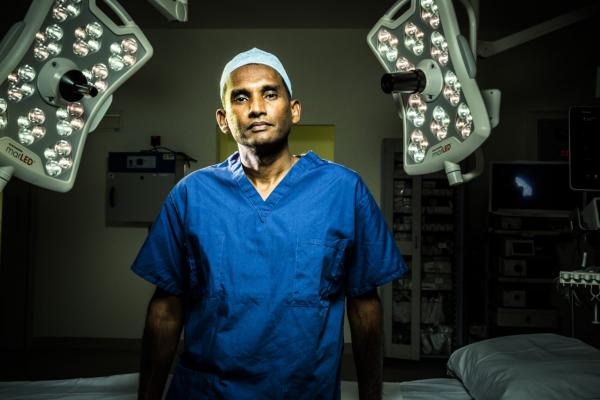 Weighing up the risks of an operation versus the impact of not treating patients at all is a daily balancing act for surgeons at Royal Papworth and Addenbrooke’s hospitals in Cambridge.

To conclude the dramatic third series of BBC Two programme ‘Surgeons: At the Edge of Life’ next Tuesday (27 October), teams at both hospitals face this difficult dilemma.

The fourth episode begins with cardiac surgeon Mr Ravi De Silva (pictured) and his 75-year-old patient, Maureen, who feels relatively well even though she has an enlarged aorta; the main vessel for carrying oxygenated blood to the body.

The issue: her aorta is in danger of bursting. If it does, it could be fatal, but the operation to fix it is extremely high risk. In Ravi’s mind there is a clear choice; the one-off risk of the operation is worth it compared to living with a condition that could be fatal at any time.

The procedure involves replacing the aorta with a synthetic tube and it is so complicated that it needs to be replaced in two parts and the blood supply to Maureen’s lower body needs to be clamped off. Once that happens, Ravi has just 30 minutes to replace her aortic arch to avoid causing serious organ damage and paralysis.

Chris has a genetic disorder called FAP which means she is susceptible to cancer in her digestive system. She has already had a brush with colon cancer that was successfully treated with surgery.

Now a polyp has been discovered in her duodenum, the first part of the small intestine, which may turn into cancer. Having lost both her brother and sister to cancer, she’s all too aware what could happen if the polyp turns cancerous.

The only way to remove it is to have a Whipple’s procedure: complicated and risky surgery involving removing the duodenum and several other parts of her digestive system before rebuilding it.

Not long ago, the post-operative mortality rate was one in five. This has come down considerably because the operation is only undertaken at a small number of designated centres like Addenbrooke’s, where a handful of surgeons are well-practised in the operation.

Emmanuel explained: “In theatre, what happens is that in a controlled way we inflict what amounts to a fatal injury. And then we put everything back together again, so that it ends up not being fatal, most of the time.”

Mr Ravi De Silva commented: “The types of operations we are able to perform now used to be the stuff of science fiction. We are indebted to the bravery of patients, like Maureen, for allowing the cameras to film their operations and follow their journeys to show the public the world-leading operations and high-quality patient care that goes on here at Royal Papworth Hospital and our neighbours at Addenbrooke’s.”

Divisional director for surgery and consultant colorectal surgeon at Addenbrooke’s, Mr James Wheeler, said: “As the series draws to a conclusion we would like to thank our staff and patients for taking part, the public for their overwhelming support and appreciation of our work, and of course the programme makers and broadcasters for their skill in creating such an insightful and important documentary.”

The fourth and final episode of series three of ‘Surgeons: At the Edge of Life’, can be seen on BBC Two at 21:00 on Tuesday 27 October.