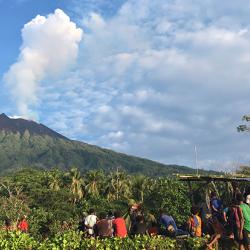 Specially-adapted drones, developed by an international team involving scientists from the University of Cambridge, are transforming how we forecast eruptions by allowing close-range measurements of previously inaccessible and hazardous volcanoes.

The team, involving 20 researchers from seven countries, used long-range drones kitted out with a range of lightweight sensors to study the Manam volcano - one of the most active volcanoes in Papua New Guinea.

Their findings, published in the journal Science Advances, show how combined measurements from the air, earth and space can be used to understand volcanic contributions to the global carbon cycle, key to sustaining life on Earth.

When the volcano last erupted between 2004 and 2006 the entire island was evacuated - crops were destroyed and water supplies contaminated. The islanders only started to return five years ago.

Previous studies have shown that Manam is one of the world’s biggest emitters of sulphur dioxide, but nothing was known of its CO2 output.

Measuring volcanic CO2 emissions is more challenging because it is already present in high concentrations in the atmosphere. The only way to get accurate readings is to take samples from close to active vents.

Collecting samples on Manam would be incredibly risky - not only is the vent flanked by precarious slopes, the volcano is also unmonitored so there would be little warning if an eruption struck.

The project - Aerial-Based Observations of Volcanic Emissions (ABOVE) – saw the first global collaboration between scientists, remote-sensing specialists, engineers and pilots.