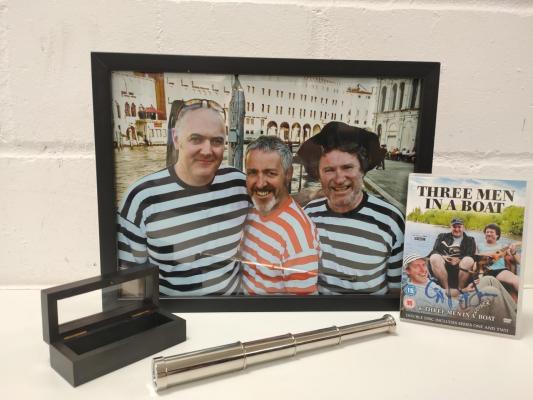 Items from Three Men in a Boat and Morons From Outer Space are among ten lots that are available to bid on right now as Griff Rhys Jones teases what’s in store when his mega Celebrity Bottom Drawer auction for EACH kicks off in just over a week.

The Suffolk funnyman has amassed over 160 rare and exclusive items from over 70 celebrities including Ed Sheeran (shoes and jeans), David Walliams (one of three copies of Baby Eric, a story written for Simon Cowell when his son was born, and other exclusive books), Tom Hollander (red jockey shorts from one of his films, a Tiffany travel clock received from Tom Cruise whilst filming Valkyrie and more), Delia Smith (pink Armani coat worn when receiving her CBE at Buckingham Palace), Cate Blanchett (goodies from her film Carol and a handwritten thank you note), Davina McCall (‘that dress’ she wore when hosting TV’s The Big Night In) and even celebrated racehorse Enable (headcollar). These will be available to view and bid for on an exclusive website from 27 November, with all proceeds going to East Anglia’s Children’s Hospices (EACH).

Griff has dug out so many items of his own, though, that some have spilt over on to EACH’s eBay site here.

Griff was awarded an OBE in 2019, partly for his services to charity, which have included taking on the job of auctioneer many a time. Here, he runs the rule over the lots available in his teaser auction:

This was a little commemoration of playing Fagin in the West End. Mean and a thief, it was my favourite role ever. I do have a house full of Fagin stuff now. There is more if anybody wants it.

These books represent a lifetime of achievement and hard work. So do the DVDs. That's two life times. But they are all my own work. And signed copies are rarer than unsigned copies. Though some say not much.

Gavel from an art auction at Hackney Empire

This was a gift from my helpers after we manged to raise over forty thousand in one auction. It should look more worn that it is, but I never got into the proper habit of knocking them down. I was too excited.

The telescope was an important part of my job making Three Men in a Boat. I was constantly looking out to see which pub Rory (McGrath) and Dara (Ó Briain) had gone into.

Morons was one of the big films of 1984. Big budget, big stars, big flop. “Die before you see this film,” according to City Limits. But City Limits is now dead. The film, however, is now considered way ahead of its time and has been the subject of a special book written about misunderstood films by the BFI (British Film Institute), no less. The suit was an integral part of my character. In fact, it was the only part of my character.

I have been on the Radio Times front cover at least five times. They started giving out the results at a special ceremony a few years ago.

Signed picture of Mel and Griff, with a signed At Last DVD

This picture was given to me by Mel. He looks better in than I do.

Plus there’s a collection of access passes for various celebrity events and shows.

Further items that will be available from Griff in the Celebrity Bottom Drawer auction include Jonathan Pryce’s coat from the film Evita and Griff’s Montblanc pen believed to be worth over £7,000.

Griff said: “We can’t as easily do the sponsored stuff. The church halls are shut. The shops have been closed. So I’ve put the word out and we’ve started our own charity second-hand site that has only celebrity cast-offs. If you’re searching for a Christmas present for a granny who’s nuts about Game of Thrones or an uncle who always does his Mick Jagger impression, we have unique authenticated GOT and Stones items for you. You have to go on the website to have a look and choose a Christmas memento for someone you know. There’s a good chance one of your favourite stars or shows will be there.”

EACH has never been more in need of fundraising support. The charity has experienced a hugely significant drop in voluntary income as a result of shops being closed and fundraising events being cancelled this year. Just before the latest national lockdown, EACH forecasted a loss of £1.7m in funding over the next 12 months - almost a third of the total it needs to support families across East Anglia. It is now losing a further £100,000 a week in retail income whilst its shops are shut in this second lockdown.

The Celebrity Bottom Drawer auction is sponsored by Citrix and being hosted by online auction experts Bid In, kindly donating its services free of charge, with Go Group giving a free platinum delivery service straight to doors. For more information visit www.CelebrityBottomDrawer.com. Anyone who feels they already have enough items around the house will be able to ‘bid for nothing’ and make a donation straight to EACH.