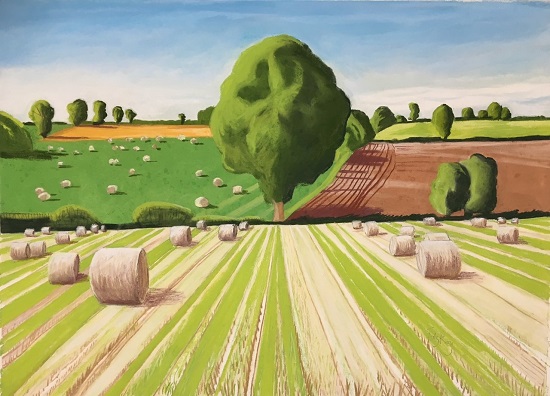 More works of art have been added to an exclusive online auction supporting East Anglia’s Children’s Hospices (EACH) - and the one-week countdown is now on!

Some of the new artists getting behind EACH are Suffolk sculptor Gus Farnes, Norfolk landscape painters Cornelia Fitzroy and Tor Falcon, and Cambridgeshire multimedia artist Liz Mills.

An exciting line-up of creative talents, including the world-renowned Antony Gormley, had already contributed over 30 works to the auction set to run for just over a week from next Thursday 25 February.

Others now lending their support are Maria Pavledis, Amanda Edgcombe, Jane Cochrane, Linda Jamieson, Pandora Mond, James Hart Dyke, Louisa Jones and internationally-renowned Tim Braden. There has also been a last-minute donation in the form of an architectural drawing from Nicholas Grimshaw, a past President of the Royal Academy of Arts and RIBA Gold Medal-winning architect.

Many have been brought onboard by Norfolk-based art consultant Davina Barber. She said: “I’ve been blown away by how generous the artists have been during such challenging times. Rarely will you have the opportunity to buy work from some of the artists involved, real leaders in their field.

EACH recently announced it was closing offices in Cambridgeshire and Suffolk, as part of a cost-saving programme in response to a predicted operational deficit of £2 million over the next 12 months. Restrictions over the last year have seen the majority of its traditional fundraising activities unable to take place, whilst every time shops have had to shut the charity has lost around £100,000 income a week.

The auction, sponsored by Martin-Redman Partners, will run until noon on Saturday 6 March. It is being hosted by Cambridge-based auction house Cheffins at www.cheffins.co.uk/fine-art and online auction experts The Saleroom are generously donating their services free of charge.

Register for the auction, with Cheffins, from 25 February or download a catalogue from www.each.org.uk/exclusive-art-auction in the meantime.