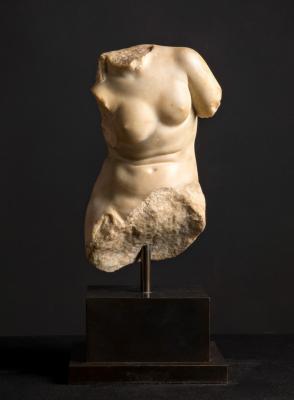 Three major London-based private collections will form a large part of the extensive Cheffins Fine Sale on the 21st and 22nd April. From Kensington, Piccadilly and Belgravia, these private collections feature important artworks, antiques and furniture, which will be offered alongside a series of other valuable items at the firm’s first Fine Sale of 2021.

From a private house in Kensington, there are a series of rare artworks and antiques, including four early portraits of the Fflolliott brothers, dating back to 1603, with an estimate of £40,000 - £60,000. Also, among the paintings, a picture by Jean-Baptiste Vanmour and Studio, titled ‘A Dinner given by the Grand Vizier in honour of an Ambassador at the Topkapi Palace, Constantinople’ is expected to sell for between £30,000 and £50,000.

In addition, there is a roman marble torso of Aphrodite, dating back to between 1st century BC and 1st century AD (pictured above) which has an estimate of £15,000 - £20,000. These are alongside important furniture items including a George III giltwood border glass mirror, circa 1770, with an estimate of £20,000 - £30,000 and a George III satinwood writing table in the manner of Mayhew and Ince which is set to sell for between £7,000 and £10,000.

Another private collection, based at Albany, Piccadilly, includes two important paintings, ‘The Lady Gardener’ by George Dunlop Leslie which has an estimate of £7,000 - £10,000 and ‘The New Locket’ by Claude-Marie Dubufe, which is fresh to the market and is expected to sell for between £8,000 and £12,000. These are alongside a series of Grand Tour plaster relief cameos and plaques and a pair of Italian bronze busts of Emperors from the 19th century, both of which have estimates at £1,000 - £2,000.

Following on the Grand Tour theme, from Wilton Crescent, Belgravia, two views of Venice in the manner of celebrated artist Francesco Guardi, are offered as a pair at £4,000 - £6,000. From the same property is also a still life painting by a follower of Joris van Son, which is set to sell from £3,000 - £5,000.

Meanwhile, a private collection in Suffolk has yielded a painting by important sporting artist, John Wootton, titled, ‘A Bay Arabian stallion being led by a groom,’ which has an estimate of £50,000 - £80,000.

Other highlights from the sale include an early French portrait of a lady, dating back to 1575, depicting Anne of Brittany, wife of King Charles VIII and Louis XII, which has an estimate of £20,000 - £30,000. Another early picture is a portrait of John Curzon of Kedleston, by Robert Peake which dates back to the mid-16th century, which is estimated to sell for between £30,000 - £50,000. Among the more modern pictures, a painting titled ‘Thunder Clouds near the Coast at Cley, Norfolk’ by Edward Seago is set to be popular and has an estimate of £20,000 - £30,000. There is also a La Marche verdure tapestry, dating back to circa 1700, which is set to sell for between £2,000 - £3,000 and also a highly collectable Eardley Norton mahogany table clock from the late 18th century which is set to sell for £4,000 - £6,000.

Brett Tryner, Director, Cheffins comments: “With substantial collections from these three leading London addresses, as well as other significant items and collections from around the country, our first Fine Sale of 2021 will certainly be among one of our most important auctions. The depth and breadth of these consignments are a huge achievement when taking into account everything that has happened over the last year since the outbreak of the coronavirus pandemic. This sale includes historic artworks, some of the finest antique furniture on offer and also a series of items which are bound to appeal not only to the trade and the serious collectors who frequent our sales, but also private buyers on a global scale.

"As 2020 saw exponential growth in online bidding and sales across all disciplines, we expect to see some high prices paid for the headline lots on offer at this auction. Last year saw record numbers of new bidders at our sales, and we look forward to being able to welcome clients back to the saleroom, both old and new, whilst of course following government guidelines on social distancing.”