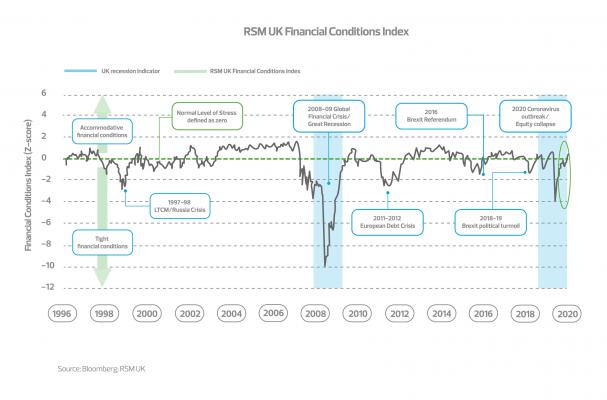 Today the RSM Financial Conditions Index continued to improve, and with it a trajectory that steepened marginally, reflecting a wider more optimistic mood among policymakers and analysts as they revise up their Q1 GDP figures.

The firm’s Index, an aggregated performance indicator of currency, bond and equity markets, has increased from 0.3 standard deviations above normal stress levels a month ago, to 0.9 today.

With the previous reading up from -0.1 below normal stress levels in Q3 2020, it appears that this latest reading could be a precursor to an accelerated improvement in UK economic prospects.

The latest UK economic data has been markedly stronger than many economists predicted, suggesting households and companies have been more resilient to the latest lockdown and the UK will climb the international economic performance league tables in the months ahead.

Laragh Jeanroy, RSM’s office managing partner for Cambridge, comments: ‘The UK economy is set to reopen gradually in the weeks ahead as the vaccination rollout continues and so the prospects for an economic recovery remains strong. That said, no matter how strong the UK recovery proves to be, the geopolitical challenges surrounding the stymied vaccine rollout internationally may hinder supply chains and wider performance for those businesses with direct or indirect exposure to the EU and other global economies.’

Joe Brusuelas, chief economist at RSM, comments: ‘The decline in Covid cases in the UK is creating the preconditions for what we expect to be a robust UK economic recovery, which is captured by the recent improvement in domestic financial conditions to just under one standard deviation above neutral. These indicators point toward improved risk appetite and the potential return to normal social and economic interaction in the near term. Helping fuel this growth are the monetary and fiscal authorities, who have completed the groundwork for a recovery from the pandemic-induced economic downturn.

‘Because economic policy efforts are transmitted to the economy via the financial markets, there has been a worldwide effort by the monetary authorities to maintain liquidity that assists long-term investment. At the same time, the fiscal authorities have taken extraordinary steps to maintain income streams and to support the public’s propensity to spend.

‘We anticipate that financial conditions are conducive to a reflation of the UK economy and growth rates at or above 4 per cent this year. We then see the prospect of a quicker pace of growth above 7 per cent GDP next year should the vaccination program overcome reported supply issues.

Laragh Jeanroy adds: ‘Most of the critical economic data for the period of the lockdown that began on January 4, including output, employment, business sentiment and public finances, have been significantly stronger than many expected and comfortably better than Q2 2020, the period that marked the first lockdown. This has been as clear an indication as any of the resilience of those businesses, and more tellingly their ability to reimagine and adapt.'

RSM also launched The Real Economy Report this week – a survey of over 400 middle market business leaders in which those questioned believe their revenues will increase in 2021 and that a full UK economic recovery will emerge within two years, despite the challenges presented by Brexit changes and the global pandemic.

Nearly two-thirds (63 per cent) of business leaders surveyed were confident that their turnover would increase in the next six months, with 56 per cent predicting a full economic recovery within two years.

RSM’s survey, entitled ‘Finding opportunity from change’ marked the first in a series of topical quarterly surveys focusing on the middle market as a powerhouse of the UK economy. It is also the first authoritative source of economic data for this crucial area of UK market, sharing insight and perspective for the wider economy.

RSM is a leading provider of audit, tax and consulting services to middle market leaders, globally.