You’ve likely heard of the importance of sales velocity. However, there’s another metric that’s arguably even more crucial: deal velocity.

Sales velocity—a measurement of how quickly a deal moves through your pipeline—has long been considered a crucial metric. But sales velocity alone doesn't tell the whole story. The time taken by the contract review process, also known as deal velocity, extends to 3.4 weeks on average, making it the most complex, time-consuming, and important part of a deal.

However, it’s also the least optimised.

This post will explore why your business should track deal velocity, how you can set about doing this, the impact that deal velocity has on your business, and the tools that will help you expedite the contract negotiation process.

What is deal velocity?

First, let’s quickly clarify the difference between sales velocity and deal velocity. Sales velocity, or sales pipeline velocity, refers to the end-to-end speed with which you acquire a new prospect, lead them along the funnel, and they sign on the dotted line.

Deal velocity, on the other hand, refers to a subset of this process. Specifically, it looks at how quickly a contract is reviewed, negotiated and signed. Organisations looking to maximise the full value of a deal should prioritise deal velocity—after all, the longer a contract is in review, the less valuable it becomes (due to it taking more of your salaried employees’ valuable time).

How to calculate deal velocity in Legal

The formula for calculating deal velocity is fairly simple. Take the number of opportunities sent to Legal, multiply this by your average deal value, and finally, multiply that by your win-rate percentage. Then, divide this total by the number of days the deal is with inside counsel before it’s signed.

It’s as simple as that. 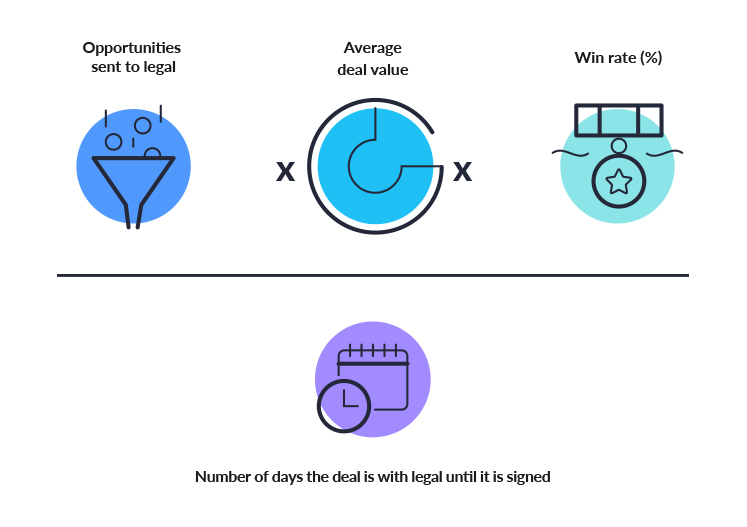 Why is deal velocity so important?

Contract negotiation skills play a crucial part in striking a successful deal. As exciting as it is to get to that stage, however, nothing’s final until both parties sign on the dotted line—and this is easier said than done. Once a contract is sent to Legal, it then undergoes an average of 5–10 revisions until it’s complete.

This is only natural. After all, each party wants each to make sure that it is getting a good deal, while lawyers are keen to manage their overall risk exposure. However, every day that passes while the contract is being reviewed potentially holds back the business’s cash flow. The more time is spent on reviewing the contract, the more money your organisation has to spend to get it over the line.

And that’s not all. It’s said that ‘time kills all deals’—and rightly so. The longer a contract is in review, the likelier it is that the buyer will lose confidence in the deal and suffer from pre-purchase buyer’s remorse. Or perhaps an unforeseen external event occurs, changing priorities and knocking unconcluded deals off course.

That’s why companies are always keen to strike while the iron is hot, building on the sales team’s momentum to get a deal over the line. That said, lawyers can’t sacrifice quality for speed—so they’re stuck between a rock and a hard place.

The negotiation period should be an opportunity to really impress the client and build the foundations for a longstanding relationship—not a painstaking exercise that drives them away out of frustration.

The impact that deal velocity has on your business

Let’s run some numbers to demonstrate the true impact of deal velocity.

Imagine a business usually has an average of five deals progressing through legal per month with an average deal size of £100k and a win-rate of 75%. Typically, these deals spend a month in legal before they get signed.

Using the formula outlined above, their deal velocity would be:

In other words, each deal that reaches the contract negotiation stage brings the company an average of £12,500. But what if they reduced their 30-day deal cycle to 21 days by relying on an automated contract review tool?

In this case, they would increase their deal velocity to £17,857. When you multiply this by the number of deals that typically get signed, you’ll quickly transform your bottom line.

How ThoughtRiver helps you rapidly move from contract to signed deal

A myriad of sales pipeline velocity tools exist to help salespeople rapidly move their prospects through the funnel. But contract negotiation—the trickiest, most time-consuming, and most labour-intensive part of the process—is always least optimised for speed.

This no longer has to be the case.

A contract acceleration platform (CAP) like ThoughtRiver reimagines the deal cycle, transforming inside counsel from a bottleneck into a frictionless enabler of velocity.

Instead of protracted review cycles, each of which takes days at a time and requires multiple stakeholders’ sign-off, the legal department can instead provide sales or procurement with a first pass review of their proposed contract within minutes.

They can even use ThoughtRiver to safely enable more self-serve within the business, so busy sales and procurement teams are able to turn around contract review tasks themselves.

Rather than calculating deal velocity retrospectively, analyse it on the go to identify tangible areas for improvements. Identify existing bottlenecks, how these could be reduced or eliminated entirely, and leverage automation-based tools like a contract acceleration platform to help you achieve it.

Allow Legal to move swiftly, accurately, and with confidence. Sign deals quicker and maximise the value of each and every one of your transactions.