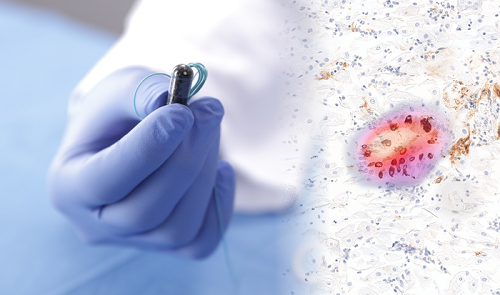 Artificial intelligence (AI) could help free up pathologist time and allow them to focus on diagnosing the most tricky cases of Barrett’s oesophagus, according to a Cancer Research UK-funded study*.

Using deep learning AI, samples taken from clinical trials** that use Cytosponge, a new diagnostic tool for Barrett’s oesophagus, were separated into 8 classes of varying priority for pathologist review.

Patients with acid reflux (gastro-oesophageal reflux disease GORD), leading to symptoms including heartburn, are at a higher risk of Barrett’s oesophagus.

It’s thought that many cases of Barrett’s oesophagus go undetected and, because oesophageal cancer is often diagnosed at a late stage, there has been a lot of interest in improving the detection of Barrett’s.

Previous work by researchers, based at the University of Cambridge, led to the development of Cytosponge ‘sponge-on-a-string’ pill test. This is a quick and simple procedure that can be performed in a GP’s surgery, and takes a sample of cells from within the oesophagus for further investigations******.

Research from the group showed that if Cytosponge was used to find patients with undiagnosed Barrett’s oesophagus, it can identify ten times******* more people than the current route. If Cytosponge becomes more routinely used in the NHS, this could increase the demand on the already busy NHS care pathway.

The researchers, led by Dr Florian Markowetz at Cancer Research UK Cambridge Institute wanted to find a way to help reduce the strain on the NHS from the analysis of Cytosponge samples, without compromising the quality of care, by using AI.

Using the biomarker TFF3, which is a hallmark of Barrett’s oesophagus, the researchers trained the algorithm to recognise overexpression of this protein in goblet cells, which are found in the oesophagus.

Working in consultation with pathologists, they developed criteria that were able to distinguish between signals that indicated presence of Barrett’s oesophagus from the noise of other cell populations.

A triage system was set out in consultation with experienced pathologists, which was broken down into 8 classes based on sample quality and how clear cut the diagnosis was. Samples that were defined as low quality, or more challenging to diagnose were prioritised for expert assessment by pathologists.

The scientists showed that triaging cases, where samples were sorted into clear cut or more challenging cases, was vital in their approach.

However, when using a triaged system where the cases were sorted, the algorithm was applied to the clearer cut 60% of cases, it was able to identify 83% of Barrett’s oesophagus cases. This suggests that it could reduce the Cytosponge analysis workload for the pathologists by 57%.

Dr Marcel Gehrung, based at the Cancer Research UK Cambridge Institute, who spent his PhD on the study and set up a spin-out company called Cyted from the work, said: “A major bottleneck for scaling Cytosponge to test large patient populations is the time it takes for a pathologist to analyse the samples, which has several time-consuming steps. By semi-automating this process, we hope to reduce workload and give pathologists the space and time to analyse the more challenging samples, where a diagnosis is less clear cut, and their experience is unparalleled.”

Professor Rebecca Fitzgerald, from the MRC Cancer Unit at the University of Cambridge, who developed the Cytosponge test and worked with the AI team, said: “We know that late stage oesophageal cancer is far more difficult to treat than when detected at an early stage. Using Cytosponge to help identify those at increased risk of the disease could make a huge difference in the outlook for these patients, and this multidisciplinary approach of using artificial intelligence in partnership with pathologists could help speed up diagnoses and help make this a reality.”

Michelle Mitchell, chief executive of Cancer Research UK said: “There’s a lot of interest around Cytosponge at the moment, which Cancer Research UK scientists helped develop. The NHS is now considering if it should be used in primary care, such as GP surgeries, to help identify patients with Barrett’s oesophagus, and it may have a role in working out which patients currently waiting for an endoscopy test could benefit from being seen soonest.

“Pathologists play a key role in diagnosis, but like so many other areas of the NHS, they have been seriously impacted by a lack of investment in workforce over the years. Research such as this, exploring how to support pathologists in their vital work through new technology and innovations is vital, as is long term investment and planning of the cancer workforce.”

As further work using the algorithm progresses, the researchers say as a deep learning tool it will continue to evolve, become even more accurate in its definition of triage classes. Researchers also say the technology could also potentially be applied to other conditions including pancreatic, thyroid and bowel cancer.

*** Eight triage classes (number 1 to 8) were composed by all possible combinations of quality control and diagnosis classes. Three blinded expert observers then ranked all eight classes from lowest to highest likelihood for patients having Barrett’s oesophagus.

***** The endoscopy involves passing a camera into the patient’s mouth and down the oesophagus to the top of the stomach.

****** The Cytosponge test is a small pill with a thread attached that the patient swallows, which expands into a small sponge when it reaches the stomach. The pill dissolved over 5 minutes and then quickly pulled back up the throat by a nurse, collecting cells from the oesophagus for analysis using a laboratory marker called TFF3.

Working to build a world where disease is prevented rather than treated.