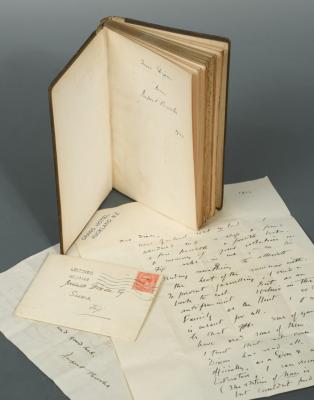 Two autograph letters signed by English poet, Rupert Brooke, will lead the Cheffins Library Sale next week (Thursday 6th May), at the firm’s sale rooms in Cambridge. They have an estimate of £4,000 - £6,000.

'New Zealand isn't so bad, I wandered into a shop and found a few passable and possible books.... to prevent quarrelling, I send a book to each. But as an antifeminist I believe in the family as a unit... But I trust that not even Mrs Dixon has read all. And, officially, as a Don and a Lecturer in Literature, I can recommend them.' Brooke goes on to say he has missed his boat '..on the 2nd I go to Tahiti, then 'Frisco--- and Home'.

The second letter, written from Rugby, is one of sympathy to Mr Dixon who is suffering from a painful condition:

'..You seem to be very brave: and that makes me proud. One feels "it hit him. It might have hit me God grant I should have borne it as bravely". ...The Life you led must have been fine: it was fine and lovely for a stranger to come into for a time. Finding you and your household in Fiji is the expression I treasure most and look back to with most delight in all my wanderings...' signed 'Goodbye and good luck, Rupert Brooke'.

The letters have been consigned to Cheffins from the deceased estate of the Douglas family, previously publishers in Edinburgh.

Charles Ashton, Director, Cheffins, says: “We can surmise that the book mentioned by Rupert Brooke and the letter found their way into the Douglas family, since as publishers they would have had literary connections. We know that Rupert Brooke sailed the Pacific and spent some months in the South Seas as part of his recuperation following the collapse of his relationship with Katherine Laird Cox in 1912 and can assume that he was a guest of the Dixon family during this period, whilst the second letter was written just before he enlisted in the army following the outbreak of WW1 in August 1914. These are important letters which provide an insight into the personality of one of the world’s most celebrated poets and are a rarity to the auction market. And, with this in mind, they are sure to be of interest for private collectors of Rupert Brooke’s work, as well as trade buyers.”

The Cheffins Library Sale also includes an additional 437 lots of books, maps, letters and drawings. Other key highlights include an ancient first edition Latin Bible dating back to 1480 or earlier, which has an estimate of £12,000 - £18,000 and a large volume of 57 engraved plates by Tomas Major, depicting the ruins of Palmyra.

Also, of London interest, is a copy of Britannia: Or, A Geographical Description of the Kingdoms of England, Scotland and Ireland, by Richard Blome, dated 1673, which includes a red and black folding plan of London and Westminster and an additional maps and engravings, with an estimate of £1,000 - £1,500. there is also a copy of A Survey of the Cities of London and Westminster by John Stow, dating from 1720, which has an estimate of £1,000 - £1,500.