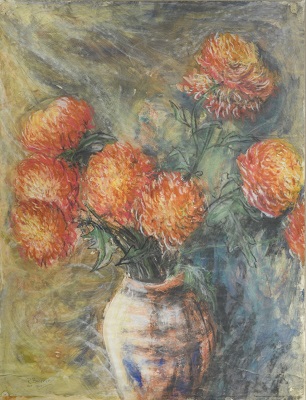 Works by some of the biggest names in 20th century art, furniture-making and sculpture went under the hammer at the Cheffins Art & Design Auction last week, with the sale grossing over £465,840 in total.

Leading the 200-lot picture section was a painting by Roger ‘Syd’ Barrett of Pink Floyd fame (pictured above), which sold for £28,270 to a collector from Italy, almost six times over its upper estimate of £5,000. Also among the pictures was an original sketch by Laurence Stephen Lowry, from a private UK-based collection, which sold for £12,293.

From another stalwart of 20th century art was a self-portrait by John Northcote Nash, circa 1945, which sold for £5,693 while another lot which drew much attention was a triptych of divers by German artist Adam Marian Pete which sold for £18,116.  Lithographs and prints also appeared to be continually in demand, with a picture titled ‘Horse Dealers’ dating from 1919 by Robert Polhill Bevan, from an edition of 80, selling for £8,411.

The objects section was dominated by 15 works by British ceramicist, John Maltby, which sold for a total of £27,186 to a combination of private collectors and trade buyers. Born in Lincolnshire, Maltby was a student of David Leach, Bernard Leach’s son, and founded the Stoneshill Pottery in Devon, where he worked until his death in 2020. On offer at the auction were a series of Maltby’s stoneware figures, inspired by English folklore, including a stoneware model, titled ‘Royal Barge’ from 2007, which sold for £4,917.20, well over its estimate of £1,000 - £1,500.

Johannesburg-born artist, Dylan Lewis, also featured heavily in the sale, with two bronze and glass tables, the base of each composed of three sitting cheetahs, they sold for £16,822 apiece to a UK private buyer who also secured the leopard head by the same artist for £11,646. A proportion of the proceeds from the sale of these pieces will be donated to Tusk Trust to support its wildlife conservation work across Africa.

Alongside pieces from Heal’s, David Linley, Robert ‘Mouseman’ Thompson and other iconic names in 20th century furniture design, were seven pieces from 1930s-female designer, Betty Joel. Proving the continuing popularity of her work, they sold for a collective £10,352 to a mixture of UK based trade and private buyers. Items on offer from Betty Joel included a number of pieces from her ‘Token Works’ heyday, including a walnut sideboard, a triple wardrobe, two different walnut chests of drawers, a mirror, two mahogany drinks cabinets and a dining table. Also amongst the furniture were five pieces by famous 20th century designer, Edward Barnsley, which exceeded pre-sale expectations, selling for £12,318 in total.

Martin Millard, Director, Cheffins, says: “This auction saw robust prices achieved across all sections and a sale rate of over 86 per cent as the appetite for the best in 20th century design continues unabated. This was our first Art & Design auction since the easing of social distancing guidelines, and it was reassuring to see that the captive audience we have gained over the past 18 months was still very much active, both online and in the room, as a small number chose to attend the sale in person. The coming months will be interesting from a market perspective, but with some excellent consignments already included for the October sale, we look forward to once again producing a diverse sale which is bound to appeal to both long-standing and new clients alike.”

The prices reported are totals, inclusive of buyers’ premium at 24.5 per cent and VAT where applicable.