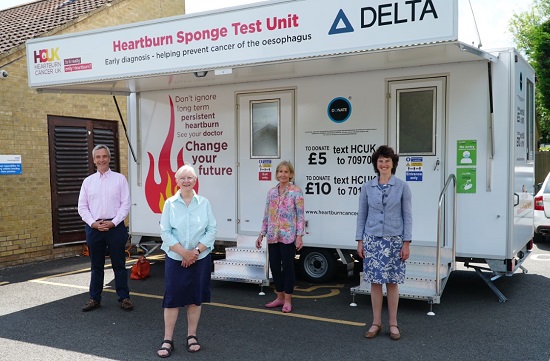 A new ‘game-changing’ test, which might save lives by spotting the early warning signs for cancer, is being brought to the doorstep of people in the Cambridge area.

Patients from Granta Practices, who have surgeries in Sawston, Linton, Royston and Great Shelford, will be some of the first in the UK to have the simple 10-minute Heartburn Sponge Test outside a hospital setting or a medical trial.

They will be invited to the innovative mobile unit, that’s been funded and equipped jointly by Heartburn Cancer UK (HCUK), the charity that promotes awareness and champions early oesophageal cancer diagnosis, and Innovate UK funded Project DELTA, which is rolling out the sponge test technology as a routine procedure in GP practices and other locations.

At the mobile unit – which is the first of its kind – patients on medication for heartburn will be invited to have a quick but potentially lifesaving test, using a ground-breaking new detection technique for early signs of oesophageal cancer, developed by researchers at the University of Cambridge and Addenbrooke’s Hospital.

The first patients are expected at the mobile unit at Shelford GP surgery on Friday 11 June.

Incidence rates of oesophageal adenocarcinoma (oesophageal AC), the most common cancer of the food pipe in the UK, have increased six-fold since the 1990s, but survival remains poor (at just 17% after five years).

Research shows, however, that 59% of cases of cancer of the oesophagus in the UK are preventable.

"Early diagnosis is key to survival for oesophageal cancer. The Heartburn Sponge Test, using the Cytosponge and lab test, is a game-changer when it comes to picking up early cell changes, which could be cancer or the pre-cancerous condition, called Barrett’s oesophagus,” said Dr James Morrow, GP and Managing Partner at Granta Medical Practices.

“At present, we have to send people we’re concerned about to hospital for an endoscopy. But the Heartburn Sponge Test is a quicker, cheaper, easier and a less invasive way to look for and monitor people who could be at risk of this dangerous, but often preventable, cancer.”

He added: “The test at the mobile unit will - at the very least - bring peace of mind to some of our patients and could - for others - catch serious conditions much earlier than they would through other processes.”

Mimi McCord, chairman of Heartburn Cancer UK (HCUK), who set up the charity when her husband died from cancer of the oesophagus after inadvertently ignoring early warning signs of persistent heartburn, said: “Early diagnosis is vital. By funding the mobile test unit and bringing the test to the doorstep of their GP, we can help more people be seen sooner, and do it in a much less intimidating and more convenient way.

“If we pick up more cases of Barrett’s oesophagus or early signs of cancer, we are much closer to preventing people from dying unnecessarily.

“This is so often a preventable disease but we just have to be clever about how we do it. The mobile unit and the Heartburn Sponge Test, using the Cytosponge, is a clever way. We hope to raise more money to widen the reach of this initiative as far as we possibly can, and we thank everyone who has supported us so far.”

Michelle Mitchell, chief executive of Cancer Research UK said: “It’s exciting to see this pilot of the Cytosponge in a primary care setting get off the ground, following over a decade of research by Cancer Research UK-funded scientists. If it means we find people with Barrett’s oesophagus, a pre-cancerous condition, sooner than would otherwise be the case, it’s possible this test could be rolled out across the NHS.

“However, the crucial question will remain of having enough capacity in the NHS to do the test and look at the samples quickly and safely. This will require long term investment from Government and sufficient cancer staff to take and process samples.”

The BEST3 trial involved more than 13,000 people and included research through GP practices which was facilitated by the Cambridgeshire and Peterborough Clinical Commissioning Group.

It used the ‘heartburn sponge’ (or Cytosponge and special lab test) developed by Professor Rebecca Fitzgerald, a Heartburn Cancer UK trustee, and her University of Cambridge and Addenbrooke’s Hospital teams.

The trial also identified early cancer in some patients.

Liz Chipchase joined the BEST3 medical trial to help out. She’d been treated for acid reflux/heartburn for 40 years but didn’t expect any issues to show up. The results of the sponge test revealed she, in fact, had oesophageal cancer.

Fortunately - she feels ‘completely well thanks’ to the sponge test trial - it was found at an early stage and was treatable.

Liz was one of the lucky ones. Because oesophageal cancer is often found late, is more usually fatal. Only 17% of people diagnosed with it live for a further five years or more after diagnosis.

Following its stay in Cambridge, the mobile Heartburn Sponge Test unit will move on to Essex and then Suffolk as the pilot aims at proving a wider benefit to the NHS.

It is hoped this could one day become a test used by GP surgeries throughout the country to identify potential issues for people who are on long-term heartburn medication, or when someone has had heartburn or indigestion for three weeks or more.

Image: Left to right- Dr James Morrow, GP and Managing Partner at Granta Medical Practices, the GP surgery group hosting the first mobile diagnostic unit; Liz Chipchase, from Cambridge, who had her early-stage cancer discovered by the Heartburn Sponge Test during the trial stages; Mimi McCord, chairman of Heartburn Cancer UK (HCUK), which has helped fund the mobile unit, and bring it to Cambridge. Mimi set up the charity when her husband died from cancer of the oesophagus after inadvertently ignoring early warning signs of persistent heartburn; and Professor Rebecca Fitzgerald, who has developed the Heartburn Sponge Test, the Cytosponge and associated laboratory test, with her team from The University of Cambridge and Addenbrooke’s Hospital.

The Heartburn Sponge Test, using the Cytosponge, in pictures*

Step 1: swallow a small pill on a string

With some water, the patient swallows a capsule attached to a thread containing the Cytosponge.

The capsule dissolves in the stomach and the Cytosponge expands. This takes between five and seven minutes.

Step 3: pull it back in seconds

A nurse pulls on the string attached to the Cytosponge and brings it back, along with some cells. This process takes one to two seconds.

Useful facts and figures about oesophageal cancer and Barrett’s oesophagus

The mobile unit has only been made possible through the support and funding of generous partners, donors and supporters.

More funds and sponsors will be needed to extend the project to new areas.

Working to build a world where disease is prevented rather than treated.