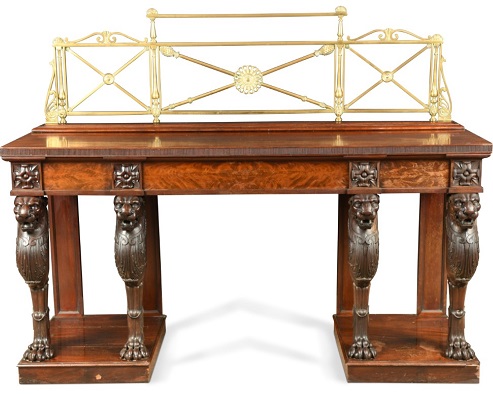 Over 600 lots of antiques and artworks will go under the hammer on 30th June and 1st July as part of the Cheffins Fine Sale at the firm’s salerooms in Cambridge.

Included in the sale are over 50 lots of furniture, antiques, ceramics and collectors’ items from the famous Hertfordshire estate, Julians Park. Built in 1605, this magnificent country house was home to established socialite and art collector, Mrs Audrey Pleydell-Bouverie, who was Lady-in-Waiting to the Queen and counted the likes of Cecil Beaton, Coco Chanel, Salvador Dali and Fred and Adele Astaire in her social circle. 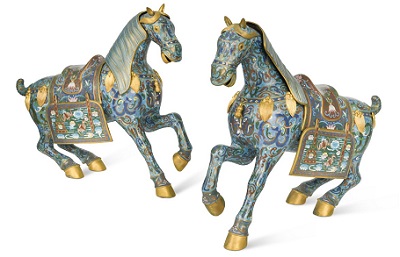 Mrs Pleydell-Bouverie appointed the influential interior decorator and designer, Stéphane Boudin of French atelier Maison Jansen to assist in the decoration of Julians Park and went on to collect furniture and artwork from across the world in her redesign of the property. Many of these pieces are now on offer at the sale, with leading lots including a pair of Chinese cloisonné horses (pictured right), with an estimate of £2,000 - £3,000; a pair of gilt side tables, circa 1930’s, with an estimate of £1,000 - £1,500 and an 18th century white marble bust of a maiden from the 18th century, which is set to sell for between £1,000 - £1,500.

The 160-lot picture section includes works by Old Masters including a painting by a follower of Jacopo da Ponte, called Bassano, from circa 1600. Titled ‘The Mystic Marriage of St Catherine of Alexandria,’ it has an estimate of £5,000 - £8,000. Also within the Old Master section is a still life by Franz Werner Von Tamm, signed and dated 1715. Most unusually this depicts flowers and a vase with a guinea pig and has an estimate of £2,000 - £3,000. The section also includes a series of portraits of famous sitters, including a portrait of Sir Abraham Hume, who was a famous art collector and politician, attributed to the workshop of Sir Joshua Reynolds, with an estimate of £3,000 - £5,000. Similarly, a portrait of William Cuninghame, 13th Earl of Glencairn is offered, signed by Bartholomew Dandridge and also a portrait of Sir Thomas Noel Hill from the circle of George Dawe.

Also available is a series of portrait miniatures, including one of the famous George-Ferrars, later 3rd Marquess Townshend which has been attributed to Richard Cosway. The Marquess caused a scandal in the early 1800s when he had an affair with his Italian secretary, resulting in the rapid breakdown of his marriage to Sarah Dunn-Gardner and disinheritance by his father. The miniature has remained in family ownership and has an estimate of £1,000 - £1,500. There are an additional 21 miniatures on offer, including an example by well-known artist, George Engleheart, of William Robinson of Denston, which has an estimate of £2,000 - £3,000.

Other key lots in the paintings section including a picture titled ‘Burning Weeds’ by Scottish artist, Alexander Mann, which has an estimate of £8,000 - £12,000 and a series of views of Italy, including Rome and Venice and a set of gouaches attributed to Giacomo Guardi of the islands of the Venetian Lagoon, which have an estimate of £5,000 - £8,000.

Leading the furniture section is a fine mahogany sideboard table, in the manner of Thomas Hope from circa 1810 (pictured). Supported by four lion monopodia with an elaborate brass gallery, the table was at one time, part of the furnishings of Balls Park in Hertfordshire. It has an estimate of £7,000 - £10,000. This is followed by a Louis XVI bois satine marquetry secrétaire à abattant in the manner of Andre Louis Gilbert which has an estimate of £4,000 - £6,000.

Brett Tryner, Director, Cheffins, says: “The consignments from Julians Park come with exceptional provenance, having been carefully pieced together by one of the leading tastemakers of the 20th century and include everything from furniture to unusual ceramics through to cigars and ancient Asian pieces. The large pictures section includes some high value Old Master pictures alongside those of local interest as well as a series of consistently popular views of Italy. These, combined with the high-quality furniture on offer, ought to help draw significant interest to this sale from the UK and further afield. We are pleased to be able to welcome live bidding back into the auction room and hope to see buyers both at the sale and during the preceding viewing days.”