ARU historian is awarded Book of the Year prize 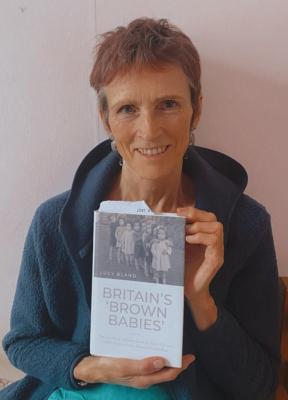 An Anglia Ruskin University (ARU) historian has won the Social History Society’s Book of the Year prize for her work uncovering the institutional racism that affected approximately 2,000 mixed-race children born in Britain during the Second World War.

Britain’s ‘Brown Babies’: The Stories of Children born to Black GIs and White Women in the Second World War by Lucy Bland, Professor of Social and Cultural History at ARU, received the Book of the Year accolade at the Social History Society’s annual conference, which is being held online.

The award, which comes with a £1,000 prize, is voted for by a panel of judges and is presented to the best original work involving social or cultural history research.  This year’s prize, which was announced today [5 July], is for the best work published in 2019.

Britain’s ‘Brown Babies’ tells the powerful stories of the children born following relationships between white British women and black American GIs based in Britain between 1942-45.

The babies were illegitimate because the black GIs were refused permission to marry by their white commanding officers. Laws in many US states didn’t allow mixed marriages, while the conservative attitudes of 1940s Britain made it difficult for mothers to bring up their children alone.

At the same time, the British government blocked the adoption of these children by African Americans, including by their fathers. Dubbed the “brown babies” by the African American media, it is estimated that almost half of the 2,000 children were placed in children’s homes in the UK.

The judges said of Professor Bland’s book: “This vivid, readable, and very moving book draws together the personal voice with broad historical concerns. It is a significant, original, and highly engaging contribution to social history, and an important reminder of the complex legacies of wartime.”

On receiving the award, Professor Bland said: “It was a total surprise as I had no idea that my book was even in contention for this award.  Publishers propose books for the Social History Society prize, and I am grateful for my publisher, Manchester University Press, for entering it.  Receiving the news that I had won was a fantastic bolt out of the blue!”

Since publication, details of the personal stories covered in Britain’s ‘Brown Babies’ have featured in an exhibition which has been on display at the Black Cultural Archives in Brixton, London, at Church Street Library in Edgware, London, and at Manchester Central Library, where it is currently on show before it travels to Liverpool Central Library in October, and then to Bristol.

Professor Bland has also worked with Dr Chamion Caballero of The Mixed Museum to establish an online exhibition. The website includes material from the book, supplemented by the stories of further people with black GI fathers or grandfathers who have come forward since Britain’s ‘Brown Babies’ was published.

Professor Bland added: “The stories told in my book have touched so many people and I’ve received some wonderful feedback, including on social media. It was lovely to see the actress Thandiwe Newton sharing a selfie reading the book on Instagram!  But most importantly, knowing that those who were personally affected have benefited from reading about and telling their own personal histories has made the process incredibly worthwhile.”