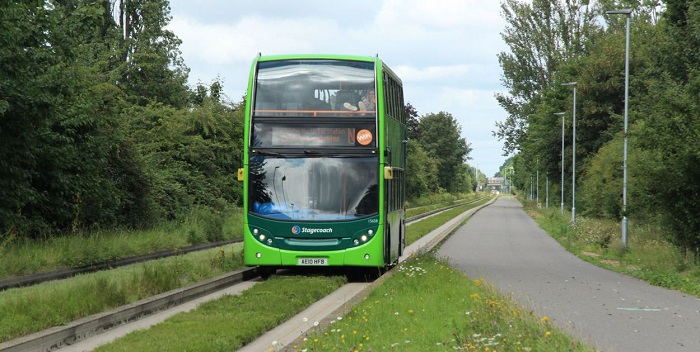 Transformative busways that will provide reliable and frequent journeys for thousands of people in Greater Cambridge have advanced to the next stage.

Members of the Greater Cambridge Partnership’s (GCP's) Executive Board agreed to progress all four of its major public transport and active travel infrastructure projects last week.

The GCP will now apply for permission to build one of the routes – the Cambridge South East Transport scheme – while the Cambourne to Cambridge scheme will proceed to a consultation on Environmental Impact Assessment.

The final two projects – Waterbeach to Cambridge and Eastern Access – are at an earlier stage and will move on to the next, more detailed scheme development stage.

Cllr Neil Gough, Chair of the GCP’s Executive Board, said: “The number of homes and jobs in Greater Cambridge continues to grow and so it is vital we deliver transport upgrades to get people from home to work and places of education quickly, easily and more sustainably.

“We need to respond to that challenge by creating an integrated transport system with a mixture of new infrastructure, better and more frequent public transport services, and deliver a compelling public transport option compared to the private car.

“Our role is to deliver the objectives of the Combined Authority’s Local Transport Plan and the Greater Cambridge Local Plan. The schemes we have progressed meet those strategic objectives to underpin that growth and will increase opportunity and participation for people in the economic success of Greater Cambridge.”

The GCP will submit a Transport and Works Act order to government to seek approval to build the Cambridge South East Transport scheme, which links communities in the south east of Cambridge to the city and key employment sites, including the Cambridge Biomedical Campus, via a busway and active travel routes to promote cycling.

Members agreed the preferred route for the Cambourne to Cambridge project, which will link the growing town and new developments with the city. The GCP will prepare an Environmental Impact Assessment after an independent audit of the scheme gave the project the go ahead.

The Board also agreed to move the Cambridge Eastern Access and Waterbeach to Cambridge projects to the next stage of development. Further detailed technical work and public engagement will be carried out on a western and a revised central route option for the Waterbeach scheme. A detailed assessment of the P&R plans will also be undertaken.

And on the Eastern Access scheme, members approved the development of detailed plans for walking and cycling upgrades along the length of Newmarket Road and further work to look at the relocation of the Newmarket Road Park & Ride site closer to the A14 J35. The GCP will also work with stakeholders to seek improvements to the Cambridge to Newmarket railway.

To watch the Executive Board meeting, visit the GCP’s YouTube channel.