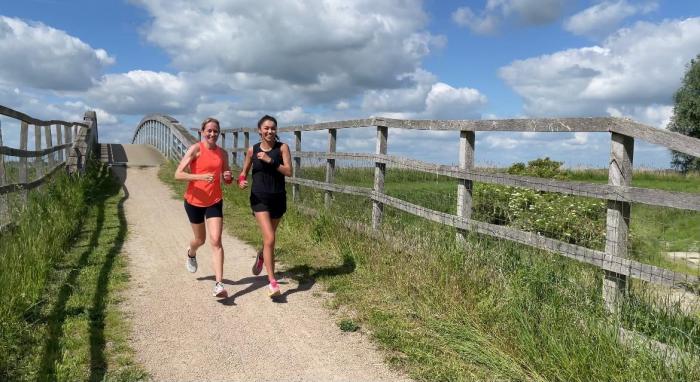 Two runners are about to set a Guinness World Record for the fastest marathon while handcuffed together, to raise vital funds for the children’s brain tumour charity Tom’s Trust.

Kerry Bullen, 48, and Troi Baxter, 26, both won places in the Virgin Money London Marathon ballot, and decided to use the opportunity to set themselves an unusual challenge to raise awareness for the difficulties children with brain tumours face.

They will run together while handcuffed at the wrists, with an aim to complete the famous 26.2-mile race in less than 4 hours 30 minutes – the first ever record for the fastest marathon run by two women handcuffed.

The pro-running pair are well-versed in running marathons, with personal bests for Kerry at 3 hours 36 minutes and for Troi at 3 hours 29 minutes. The extra challenge aims to represent the disabilities faced by children with brain tumours, which are the side effects of the life-saving medical and surgical treatments they have to undergo.

Kerry has three children – Olivia, 17, Alex, 15, and Ben, 12 – and chose to raise money and awareness for Tom’s Trust because her children went to school with Tom Whiteley, in whose name the Cambridge-based charity was founded after he sadly died at the age of nine in 2010 from a brain tumour.

Kerry, who works for a wealth management company and lives in Burwell, Cambridgeshire, said: “I’ll never forget the devastating letter we got from the headteacher when we learned Tom had died. I had children the same age and I’ve been motivated to help the charity ever since.

“We’re regular runners but this latest challenge will be something completely different. Our legs will be in sync but we’re struggling to work out a way to move our arms. However we’ve managed a half marathon in handcuffs in 1 hour 45 minutes so we’re optimistic.

“We wanted to do something that would on some level represent the struggles these children go through to recover from a brain tumour. Out of those who survive, the majority have lifelong disabilities as a result that need ongoing support. We wanted to do something big to draw attention to the charity and the help it gives these children and their families.

“We’re so grateful to those who have said they’ll donate already. We’re already out running regularly and we’re excited about the challenge.”

Kerry has run the London Marathon three times and Troi, who is a dentist from Newmarket, Suffolk, has run it once. The pair will leave from the ‘green start’ alongside celebrities.

They have have six major marathons planned for 2021, including Chicago just a week after the Virgin Money London Marathon on Sunday 3 October. The pair hope to raise £5,000 for Tom’s Trust.

Debs Whiteley, Tom’s mum, who co-founded the charity, said: “Sadly, one in three children with a brain tumour will die, and there’s, quite rightly, a big focus on life-saving treatments. But out of those that survive, 62 percent will be left with lifelong disabilities such as blindness, hearing loss, lost motor-function or learning disabilities.

“This is a topic which often comes secondary to initial tumour treatment, but it’s a focus for us at Tom’s Trust as families need support for years after their medical treatment, due to massive life changes.

“That’s why we’re so thrilled to see Kerry and Troi draw attention to this important topic. We can’t thank them enough, and we will be there on the sidelines cheering them on.”

To donate to Kerry and Troi’s fundraising page, go to www.justgiving.com/fundraising/marathonhandcuffed

To sign up to your own challenge for Tom’s Trust, go to www.tomstrust.org.uk/get-involved

Tom's Trust is a charity which funds clinical psychology across the UK for children with brain tumours and their families.