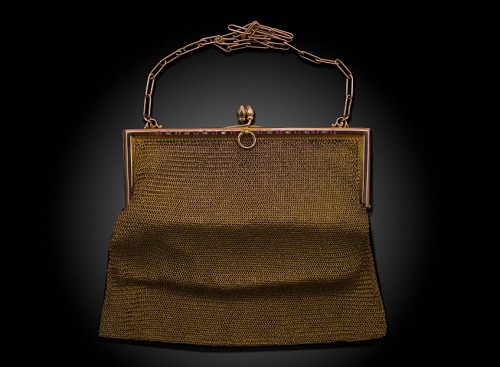 The second Cheffins Jewellery, Silver and Watches sale will take place on 26th August at the firm’s sale room in Cambridge.

Alongside over 260 lots of high value jewellery, there are also a series of items with royal provenance available at the sale. Leading these are two early 20th century mesh style dance purses, belonging to the Right Honourable Countess Spencer (DCVO, OBE, 1897 – 1972), with estimates of 1,000 - £1,500. Countess Spencer, Princess Diana’s paternal grandmother, was born Cynthia Ellinor Beatrix Hamilton. She married Viscount Althorp in 1919 and was appointed Lady of the Bedchamber to Queen Elizabeth in 1937. She continued the role after Elizabeth became Queen Mother in 1952 and remained in the post until her death.

Another lot within the sale with royal connections is a collection of four early to mid-20th century nécessaires, one of which was gifted to Lady Anne Spencer, Countess Spencer’s daughter and the aunt of the late Diana, Princess of Wales. The outer is engraved ‘ANNE’ and the inside, with fully fitted interiors is engraved ‘FROM HOUSEHOLD STAFF, ALTHORP, 4TH AUGUST 1941.’

Lady Anne Spencer was born on 4th August 1920, allowing speculation that this nécessaire was a 21st birthday present. She went on to marry Christopher Wake-Walker in Westminster Abbey in 1941 in the presence of most of the Royal Family, including the then Princess Elizabeth, now Her Majesty the Queen, and Princess Margaret. The collection of nécessaires is thought to fetch between £200 and £400.

Among the silver, there is a 20th century silver presentation salver which was gifted to Air Vice Marshal James Edgar ‘Johnnie’ Johnson, the highest scoring Western Allied pilot against the German Luftwaffe and the Royal Air Force’s officially recognised top-scoring fighter pilot of WW2. The salver was gifted to Johnson on his retirement in 1962 and has an estimate of £600 - £800. Another lot with a wartime connection is a WW2 campaign medal group with two rare ‘Caterpillar Club’ pins – these belonged to Flying Officer Edward Harold Ruston RAF and the group has an estimate of £600 - £800. Also amongst the medals is a WW1 medal trio with a Distinguished Conduct Medal and a Croix de Guerre avec Palme, awarded to 516 Lieutenant Frederick Joseph Evans of the East Surrey Regiment. The Croix de Guerre avec Palme was personally presented to Evans in November 1915 by General Sir Douglas Haig for his activities which were also mentioned in dispatches. This medal group has an estimate of £700 to £900.

The highest value lot in the jewellery section is diamond necklace with an estimate of £12,000- £15,000. Whilst there is also a number of Art Deco period pieces, including rings, earrings, brooches and bracelets, with estimates from £100 to £5,000, featuring sapphires, diamonds and emeralds. A large contingent of jewellery pieces with coloured stones are also on offer, including a pair of sapphire and diamond cluster ear studs, with an estimate of £10,000 - £15,000 and an impressive rubellite and diamond cluster ring which is set to sell for the same estimate.

Steven Collins, Jewellery, Silver & Watches Specialist at Cheffins says: “This sale sees a comprehensive catalogue featuring both antique and modern jewellery, over 130 lots of silver from across the globe and some very collectable watches. Items with royal provenance or those with a good wartime story attached always draw particular attention from collectors and we expect to see a good number of both specialists and private buyers attending the sale.”