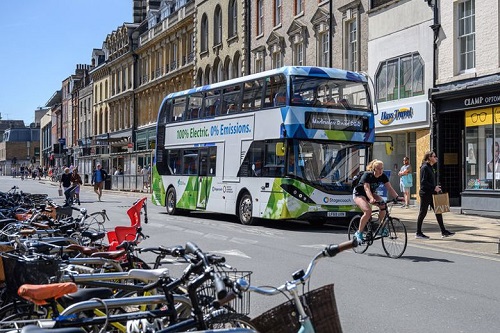 A revolutionary vision for a world class sustainable travel network for Greater Cambridge has been revealed – including more bus services and cheaper fares to help transform how people choose to travel in this area.

The future bus network could mean a bus every ten minutes in Cambridge, and from larger towns and villages –plus a new hourly service from rural areas - to improve access and increase opportunities for people living and working in the Greater Cambridge area.

Other improvements could include buses available over longer hours and more direct services to reduce circuitous routes, improve reliability and journey times.

The plans address calls for a new sustainable transport network for Greater Cambridge to reduce pollution and put the area on the path to net-zero carbon.

The proposals are part of the Greater Cambridge Partnership’s strategic vision for a world-class, sustainable and joined up transport network that links the planned segregated busways and the Greenways active travel routes. GCP will work in partnership with Cambridgeshire County Council and the Cambridgeshire and Peterborough Combined Authority to deliver this transformation.

Subject to agreement from the Joint Assembly and Executive Board, the GCP will launch a public consultation this autumn on a road map to transformational change, including plans for improved bus services, ways to create space for more services, and ways to generate funding – such as a parking, pollution or a congestion charge - as current and future traffic levels would prohibit improved services in the city centre.

The paper also sets out plans to work with the Combined Authority and bus operators to support a bid to government to secure funding for new zero emission buses to operate in Greater Cambridge.

These proposals have been published by the Greater Cambridge Partnership in the City Access paper to be considered by the Joint Assembly meeting in September.

The GCP has already engaged widely to find out people’s views about transport and travel in Greater Cambridge and the next consultation will build on what people have already identified as their priorities for how they want to get about.

The subsequent Greater Cambridge Citizens’ Assembly looked in detail at pollution and transport issues, and set out their vision for reducing the number of cars on our roads to cut congestion and pollution - and called for the GCP to “be brave, be bold and take action”.