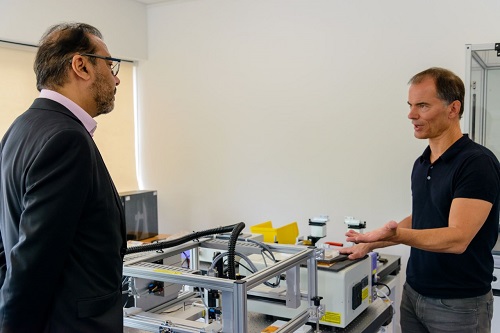 Cambridgeshire & Peterborough Combined Authority Business Board member Professor Aamir Khalid visited a world-first, homegrown Cambridge business to find out how loan support is helping them to take their growth to the next level.

TeraView is a company reflective of the unique business ecosystem which exists in the region. Born as a ‘spin-out’ from Toshiba and the University of Cambridge, it was co-founded by Sir Michael Pepper and Dr Don Arnone in 2001. Twenty years have since been spent developing patents and intellectual property on ways to use terahertz light for a range of commercial purposes.

Prof Khalid was given a tour of TeraView’s new premises at Cambridge Research Park by Dr Arnone. The new base means it now has space to develop its manufacturing function and grow the business. The move from the more central location of St Johns Innovation Park was supported with a £120,000 Growth Fund loan via the Business Board.

While such groundbreaking technology takes time to develop, the company is now well placed to scale and move to full profitability. Currently employing 21, the relocation will be a springboard for a doubling or even tripling of the workforce over the next five years. Dr Arnone’s projections are that the potential for its technology in the automotive, semiconductor and other industrial inspection markets will approach $100 million over time.

TeraView is a world-first company in the application of terahertz light technology. Terahertz light lies between infra-red and microwaves, and as such has unique properties which enables it to pass through objects and to transmit images and compositional (spectroscopic) information that is ordinarily hidden. Terahertz is non-destructive, safe and fast, making it the ideal inspection and imaging modality for many applications across a range of industries. TeraView’s customers include semi-conductor manufacturers and those in the car, food and pharmaceutical industries. Clients have included Ford and Intel, showing the potential to attract global ‘blue chip’ clients.

Asia and the US will continue to be key markets for TeraView, which is predominantly an export business. It is building sales and technical support based in those key markets, but Dr Arnone said it wants to retain its R&D base in Cambridge. New jobs in both its manufacturing and development teams will be created as part of its planned major workforce expansion. Another benefit to the local economy is the use of local suppliers to support the manufacture of its products, where Dr Arnone said they offer both the precision and flexibility needed by TeraView.

Prof Aamir Khalid of the Business Board said: "This is another breakthrough company emerging from the exciting, dynamic business environment we have in Cambridgeshire & Peterborough. To turn a pioneering technology into a viable commercial opportunity is a fantastic achievement and I applaud TeraView for the ingenuity and hard work it has taken to get to this point.

“TeraView was at a key phase where it needed to change locations in order to scale up and I’m glad the Business Board has been able to play a part in helping their move. Visiting their premises it was clear they now have a great platform to accelerate their growth, with both local people and the local supply chain the beneficiaries through more skilled jobs and greater business opportunities.”

Prof Khalid is the Chief Executive of The Welding Institute (TWI Ltd), which is based at Granta Park near Cambridge.