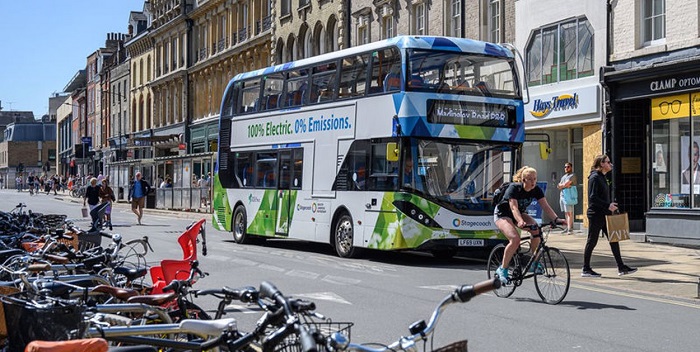 The GCP’s Executive Board last week [Thursday] agreed to consult on a package of options to deliver an innovative future bus network – with more services, cheaper fares and new and improved routes – and an expanded and enhanced active travel network.

The future bus network could mean buses running every ten minutes in Cambridge and from larger towns and villages, along with new hourly services in rural areas, to improve opportunities for people living and working in the area.

The plans would offer more reliable and faster services, which would be available over longer hours.  Lower fares and a comprehensive walking and cycling network will mean more flexible travel options for thousands of people – cutting congestion, reducing emissions and improving air quality.

A public consultation will now be held this autumn which will ask people for their views on the options for a new bus network, along with their thoughts on how best to reallocate road space to public transport and active travel. It will also ask people to consider the options for raising money to fund better bus services.

Cllr Elisa Meschini, the new Chair of the GCP’s Executive Board, said: “This is an important milestone in our roadmap for transforming public transport and active travel in Greater Cambridge. We have consensus across the Joint Assembly, the Executive Board and Mayor Dr Nik Johnson - which is a significant step towards the delivery of a world-class, sustainable and integrated public transport network.

“I’m heartened to hear that we have people behind us and they want us to get the wheels turning quickly and efficiently to provide significantly better journeys for thousands of people every day, while cutting congestion, carbon emissions and improving the quality of the air we breathe.

“We will be launching a public consultation in the coming weeks which will ask people for their views on our plans for an innovative bus network, along with asking them to think about how we make space for people and more buses, and how we raise revenue to fund public transport services in the future.”

Mayor Dr Nik Johnson, Leader of the Cambridgeshire and Peterborough Combined Authority, said:  “It’s very clear we have a growth challenge in the Greater Cambridge area, alongside the big challenge with the climate emergency – we need people to take public transport, and walk and cycle, to end the dependency on the private car.

“We need better public transport, and it needs to be competitive and responsive to the public that we serve to give communities access to work and education opportunities. To achieve that, we need to think how we provide that on already crowded roads and the challenge of raising revenues to fund it.

“I’m wedded to the ideas in the City Access programme. It hits the three Cs - it’s compassionate, it’s cooperative and it delivers for the community, and most importantly it improves public health and the environment, and that aligns with what we expect to come out of the refreshed Local Transport and Connectivity Plan being developed by the Combined Authority.”

The plans address the need for a new sustainable transport network for Greater Cambridge that will put the area on the path to net-zero carbon.

It is part of the Greater Cambridge Partnership’s strategic vision for a world-class integrated transport network that links into the planned segregated busway projects and active travel routes, including the Chisholm Trail and the 12 Greater Cambridge Greenways.

The GCP has already engaged widely to find out people’s views about transport and travel in Greater Cambridge and the autumn consultation will build on what people have already identified as their priorities for how they want to get about.

The subsequent Greater Cambridge Citizens’ Assembly looked in detail at pollution and transport issues, and set out their vision for reducing the number of cars on our roads to cut congestion and pollution - and called for the GCP to “be brave, be bold and take action”.